Another day, another long list of talks and posters to see. Here is a brief synopsis of the talks I attended. I only wish I had the time to fully discuss everything that went on and all the material covered, but that would take volumes of material and far more time than I have. As before, if any of the talks sound sufficiently interesting that you want more information, please ask and I will discuss them in more detail. I realize that there are a lot of terms and creature names that may not be familiar to all readers, but the greatest learning takes place when one asks questions, so ask and ye shall receive. 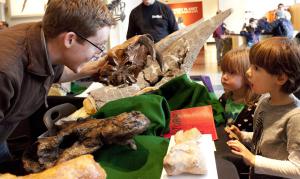 The big session for today was for the Romer Prize. Alfred Romer one of the most influential vertebrate paleontologists of the 20th century, so every year, SVP awards the Romer Prize to the best presentation by a predoctoral student. A student usually applies within a year of completing their PhD. Those that successfully apply give a talk in the Romer session at SVP, which are voted on by the prize committee and awarded at the end of the conference. It is the highest honor a vertebrate paleontology student can win and so is quite an honor. This year went to a friend of mine I went to grad school with by the name of Adam Huttenlocker.

The first Romer talk I attended was by Stephen Brusatte, who talked about theropod dinosaur phylogeny, finding that while there is good support for a number of relationships in the theropod lineage, we still don’t have a good handle on how the early coelurosaurs, such as tyrannosaurs and ornithomimids, fit into the theropod family tree. He was able to conclude, after a detailed analysis of birds and their closest nonavian dinosaur relatives, that there is no real distinction to be made between them that truly delineates birds from other dinosaurs, giving further support to the dinosaur-bird hypothesis. Nevertheless, once birds did evolve, they evolved quickly, rapidly diversifying.  Stephanie Drumheller looked at bite marks to see if you can tell the difference between crocodylians by what damage they leave on the bones. Thomas Evans looked at literally thousands of bones in rivers and found that what we have traditionally expected bones to look like after being carried downstream did not really match the reality at all, forcing us to have to rethink our assumptions of how much we can really say about fossils based on their condition. Adam Huttenlocker examined the “Lilliput Effect” after the Permian extinction. It has been noted that after mass extinctions, animal body sizes decrease, but exactly why that occurred was unclear. What Adam found was that selective extinction of the larger, faster-growing groups was the best explanation in this case. One might ask what other possibility might there be, which would be that all the animals simply got smaller, with some going extinct, but Adam found that smaller species did not alter their size through the extinction, they just survived when the large, fast-growing species died out. Neil Kelley was able to determine, in large part, the diet and feeding behaviors of most ichthyosaurs based on their morphology. Stephan Lautenschlager did a detailed study of therizinosaurs found that having beaks reduced stresses on their jaws and their famous giant claws were likely used to hook and pull vegetation, not for digging or fighting (at least, not primarily).  Yasuhisa Nakajima used 3D micro-CT analysis to determine changes in bone growth and how much that can tell us about growth in extinct animals and James Neenan provided the first complete phylogeny of placodonts, the earliest group of marine reptiles. 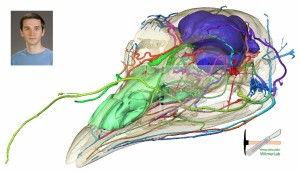 Blood supply in the turkey. By William Porter.

Dinosaur noses got a lot of attention this meeting. William Porter mapped blood circulation in the dinosaur Camarosaurus, A.W. Crompton studied the evolution of turbinates in the nasal passages of early therapsid mammaliforms, indicating that they may have originated as a countercurrent heat exchanger to help regulate body temperature.  Tomasz Owerkowics also discussed the role of turbinates in mammals in thermoregulation, but found they do not serve that purpose in birds or other reptiles. Along the way, they discussed the evolution of the different breathing apparatuses in mammals and reptiles. Robert Eagle also looked at dinosaur thermoregulation, but did so using carbon and oxygen isotopes measured together, which indicated a mammalian level body temperature for sauropods, but somewhat lower for oviraptors (although still higher than modern reptiles). Having large brains is often linked to higher metabolism and both ornithomimimosaurs and troodontids have been considered to have large, almost avian-like brains, but Harry Jerison found that at least their forebrains, while large for most dinosaurs, were still lower than avian forebrains. Going back to therapsids and the permo-triassic extinction, Jennifer Botha-Brink found that therapsids showed reduced life span and earlier reproductive maturity after the extinction event, consistent with what one might expect from populations that lived through an ecological catastrophe with reduced resources.

In strictly morphological evolution studies, Gabriella Sobral found that the fenestrated middle ear, which helped improved hearing capabilities, was not a unique event, but evolved independently six times within dinosars alone and was even rather inexplicably lost in stegosaurs, ankylosaurs, and oviraptors. Henry Tsai looked at hip joints in saurischian dinosaurs and found the femur did not fit the hip socket very well, indicating a lot of soft tissue must have been present in life and that the amount of soft tissue increased as the animals got bigger.  Nicholas Campione came up with a new way of estimating body mass for bipeds to get around the fact that the standard equations were designed for quadrupeds and don’t work all that well for bipeds. It turns out that a simple correction factor of the standard equations worked fairly well, simply multiply by the square root of two. now to figure out just how well that really works and why. One potentially confounding factor is that it was based on living birds. I doubt it would hold true if used on say, a kangaroo. Finally, the last talk I want to mention was by Kevin Padian, who after discussing the earliest known bats, proposed that they never glided, but instead used their early wings to make a fluttering, control descent from trees. In his view, bats evolved from mostly terrestrial forms that ran up into trees to avoid predators (much like Dial‘s talk of the previous day), were insectivorous, and jumped out of trees to flutter farther and farther distances. He openly admitted this part was currently speculation and will need much more evidence before it should be accepted as definitive, but was a plausible hypothesis which can be tested, which I think is the mark of a good scientist, clearly delineating between what we know and what we think, between fact and a possible explanation. 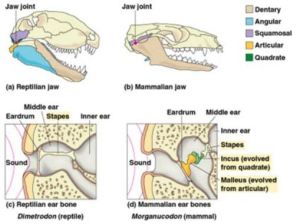 So what of this, if any, looks interesting to you? What would you like to know more about?