The answer to last week’s Mystery Monday fossil was supposed to be posted last Friday, which didn’t get done. I am going to have to make some changes in the schedule or change the way I do things because I simply don’t have the time to post a new fossil and give a full discussion of it every week and do anything else. So if you have any suggestions on how you think changes would be best done, let me know. I could cut back to every two weeks; still give a fossil every week, but not go into much discussion of what it is each week; or some other possibility. Let me know your preferences.

At any rate, for the last Mystery Monday fossil, I posted this little fossil.

What we have here is a little goniatite ammonoid that has been pyritized, meaning that the shell has been replaced with pyrite. This type of fossilization is pretty common. As the bacteria eat the organism, some of them will release sulfur, which then combines with the hydrogen in the water to form hydrogen sulfide. When it precipitates out of the water, it usually does so as pyrite. In some cases, like in this one, the pyrite crystals can replace the organism so well that it makes a detailed copy of the original. For obvious reasons, this type of fossilization is called replacement, in which the original oranism is replaced with a mineral, be it calcium carbonate, iron, opal, quartz, or in this case, pyrite.

So what are goniatite ammonoids? Ammonoids are part of the group (often called phylum, but for various reasons the specific rank of the group is often no longer used) Mollusca; which includes snails, (gastropods), clams (Bivalvia, meaning two shells, or less commonly, Pelecypoda, meaning hatchet foot), and the Cephalopods.

Cephalopods include the squids and octopuses, as well as the Nautilus, which is what concerns us here. If you aren’t familiar with a nautilus, think of a squid inside a spiral shell. Squids used to have shells, either long, straight ones or curved and coiled ones. The only one left of these shelled squid is the nautilus. However, you can still see the remnant of the shell in an internal structure called a squid pen, or in the case of cuttlefish, the cuttlebone. In either case, they are the last vestiges of the external shells we see in the nautilus and the ammonoids.

How does one tell the difference between the different types of ammonoids? Look at the internal partitions. These partitions, called septae, separate the chambers within the shell. As the animal grows, it adds material to the edge of the shell, making it larger and larger at that end. Once the shell gets big enough, the animal will create a new partition in the back, separating the current body chamber from the earlier, smaller one. A small hole is left in the septae so the siphuncle, a thin tube, can pass through, connecting all the previous chambers. The siphuncle could then be used to pump water or gas in and out of the chambers so they could be used as ballast, allowing fine control of their buoyancy. 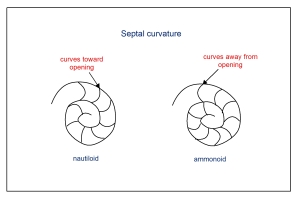 The septae in the nautiloids (the group of ammonoids containing the modern nautilus) are all very smooth, forming a nice curve. The nautiloid septae curve inwards, whereas the ammonoids curve outwards to some extent. Ammonoid septae are also much more complex. Goniatites, the earlier forms, had simple wavy septae. Ceratitic ammonoids created septae in which the waves were more jagged, with what often looks like little saw-toothed crenulations. The later ammonites (many people call all of them ammonites, but this term more properly only refers to the more derived subset) had very complex septae, showing several smaller wave patterns overlaid upon the larger wave. 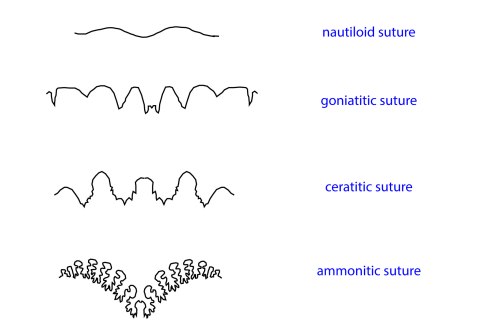 Ammonoids were very common in the Paleozoic and Mesozoic and were found throughout the oceans of the time. They typically lived in shallow marine environments all over the world. They also evolved rapidly, so new species tended to appear and disappear on a fairly regular basis. This abundance, diversity, and rapid turnover make them prime index fossils. Index fossils are those fossils which are useful for dating the rock layer and correlating the layer from one spot to another. Using index fossils allows us to piece together a complete sequence of events even if there is no one place that has the entire sequence of rocks preserved. As a result, any fossils that can be used as index fossils become very important to people trying to figure out the history of life on earth, such as this little ammonoid. If you want to find one for yourself, look in almost any of the limestone or chert formations in the Ozark mountains. There are plenty.