The Gender Gap in STEM fields and the Nature of Science

If ink was blood, the discussion of the lack of women in STEM fields would exsanguinate the whole of the human species. Yet for all the talk, the problem remains. Why? Let me answer that by bringing to your attention a post by Dr. Janet Stemwedel, a professor of philosophy at San José State University who writes on this and other topics concerning the thinking underlying how science is done. The post is not long, so I will post most of it here, you may find the original here. To clarify the post in case it doesn’t come across clearly: she quotes a block of text discussing the gender gap in the sciences and then provides her response to it.

However, there are times when people seem to lose the thread when they spin their causal stories. For example:

“The point of focusing on innate psychological differences is not to draw attention away from anti-female discrimination. The research clearly shows that such discrimination exists—among other things, women seem to be paid less for equal work. Nor does it imply that the sexes have nothing in common. Quite frankly, the opposite is true. Nor does it imply that women—or men—are blameworthy for their attributes.

Rather, the point is that anti-female discrimination isn’t the only cause of the gender gap. As we learn more about sex differences, we’ve built better theories to explain the non-identical distribution of the sexes among the sciences. Science is always tentative, but the latest research suggests that discrimination has a weaker impact than people might think, and that innate sex differences explain quite a lot.”

What I’m seeing here is a claim that amounts to “there would still be a gender gap in the sciences even if we eliminated anti-female discrimination” — in other words, that the causal powers of innate sex differences would be enough to create a gender gap.

1. that there is absolutely no reason not to work to eliminate anti-female discrimination; whether or not there are other causes that are harder to change, such discrimination seems like something we can change, and it has negative effects on those subject to it;

2. that is is an empirical question whether, in the absence of anti-female discrimination, there would still be a gender gap in the sciences; given the complexity of humans and their social structures, controlled studies in psychology are models of real life that abstract away lots of details*, and when the rubber hits the road in the real phenomena we are modeling, things may play out differently.

Let’s settle the question of how much anti-female discrimination matters by getting rid of it.

Dr. Stemwedel hits directly on a error that is seen throughout every facet of social interactions, to say nothing of public understanding of science. The discussion had strayed into unproductive areas and away from any attempt to resolve the problem. Dr. Stemwedel attempted to bring the focus back to the problem needing to be solved.

In this instance, going back to the original post to which Dr. Stemwedel was responding, the initial question put to Neil DeGrasse Tyson was “Why are there fewer women in science?” The true answer to that question is that there are multiple reasons for the gender gap, one of which happens to be that there is a clear discriminatory bias against women in science (this fact is so well documented that linking to only one or two articles seems pointless as a quick Google search will immediately turn up a very long list of sources). Tyson did not deny there were other factors, but he focused on the sociological aspect as that problem is highly prevalent and something that can be changed.

Chris Martin, the author of the post Dr. Stemwedel was responding to, goes to great lengths to talk about all the other issues involved in the gender gap, ignoring the reason Tyson focused on the sociologic aspect. Contrary to the claims of Mr. Martin, the point was indeed to draw attention away from anti-female discrimination. He clearly states in his post that he believes evolutionary pressures explain the gender gap better than sociological ones and that the sociological factors are therefore unimportant. His whole post is a response to the assertion that this bias prevents many women from entering the field.

Unfortunately for Mr. Martin, the evolutionary factors Mr. Martin espoused are not as well understood and nowhere near as well documented in humans as is the discrimination against women. But here is the important thing: We can’t do anything about past evolutionary pressures. We CAN do something about the discrimination.  No one is arguing there aren’t other reasons. But if you want to solve the problem, you focus on the aspects of the problem you can fix.

This problem in thinking is so widespread, one could easily argue that everyone does it. Certainly, unless taught to do otherwise, everyone does indeed make this mistake. In all of science and engineering, there is one basic rule that is critically important you must do: clearly define the problem in terms that can be dealt with. You have to be able to understand the problem in clear enough terms that you can parse out what things are relevant from those that are not. In this case, claiming there are evolutionary pressures is irrelevant to the problem of reducing the gender gap. We know that anti-female discrimination occurs. We know it is widespread. Of all the problems that Mr. Martin mentioned, this is the one that most obviously lends itself to resolution because it involves behaviors that the vast majority of people can agree on that needs to end. Unless one can reasonably expect to fix evolutionary pressures, distracting attention from the problem that can be solved is counterproductive. The good news is that when people do focus on the problems, things can and have gotten better. We still have a long ways to go, but it is improving. 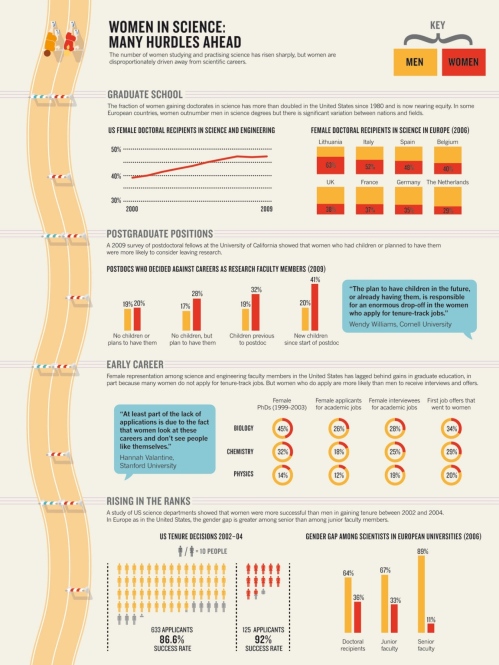 The point of this post is not really to argue about anti-female discrimination in science, although that is a hugely important topic and something that every teacher needs to be aware of and help to stop. The real point of this post is to highlight the importance of knowing your question well enough and clearly enough that you can make progress on answering it, solving the problem. This particular topic just happens to allow me to highlight two really important topics at the same time. The next post will cover some more vitally important mistakes in thinking that anyone trying to teach the nature of science, and really, any other subject, needs to understand so you can work hard on helping your students overcome them.