Continuing our celebration of marine animals of the Cretaceous found in Arkansas, here is a picture of a mosasaur. It is from the Dallas (Perot) Museum of Nature and Science. They have a great display of several different mosasaurs. You can also see one on display at the natural history museum located at the University of Texas at Austin. 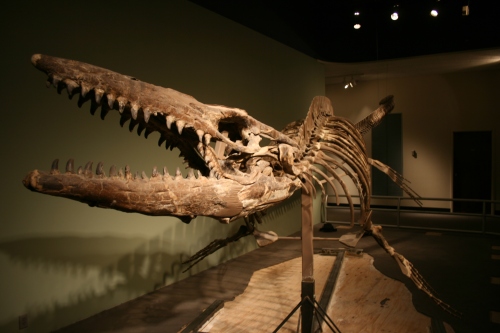 Mosasaurs were the apex predators of their time, which was in the Late Cretaceous. Tyrannosaurs may have ruled the land, but mosasaurs ruled the seas. The first mosasaurs appeared in the early Cretaceous, but by the end, they dominated the oceans. Unfortunately for them, they only had a 20 million year or so run at the top before the mass extinction at the end of the Mesozoic Era wiped them out along with the dinosaurs. 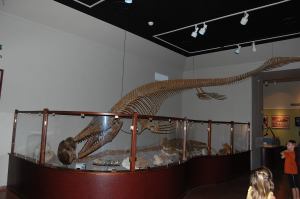 Mosasaurs were not related to dinosaurs, other than also being reptiles. They were most closely related to the group of lizards that include the monitor lizards, such as the Nile monitor and Komodo Dragon. They were fast predators with a powerful tail to move them through the water. Mosasaurs were so adapted to the water that they bore live young and were not able to walk on land, although they did still have to surface for air like every other reptile. Recent research has found they were endothermic (warm-blooded), unlike their competitors, giving them an edge by allowing them to sustain higher activity levels. It also meant they had to eat more often, making it necessary for them to be effective hunters. Research has also indicated they were countershaded, with a lighter belly than the back, much like many sharks of today. They had a varied diet, with some species specializing in different prey, so over the whole group, they pretty much ate everything in the ocean.

Mosasaur bones have been found in many places throughout southwest Arkansas, which was covered by the Western Interior Sea during the Cretaceous. Two species have thus far been recognized. Platecarpus was fairly small, only 4-5 meters (13-16 feet), but were noted for some exceptionally preserved fossils that retained the impressions of a tail fluke, allowing paleontologists for the first time to see what their tails looked like. The other species is Mosasaurus itself, a huge predator that reached lengths of 15-18 meters (50-60 feet).

By paleoaerie in Fossils of Arkansas, Paleontology on August 16, 2016.
← Sharks! Welcome Back to School Marine Paleo Animal Fest, Day 3 →