Home » Uncategorized » The 12 Days of Books to Buy for Your Science Readers: On the Fourth Day of Book Lists…

The 12 Days of Books to Buy for Your Science Readers: On the Fourth Day of Book Lists…

People assume we are the masters of the world, but in very real terms, we are relatively insignificant compared to the insects. If you’ve never really thought about insects more than as pests and thought the world would be better without them, read this book. Dr. Sverdrup-Thygeson will show you a world run by the tiny, how the insects have an essential role in ecosystems and your very life. Along the way, with humor and lavish images of the wonderful and bizarre, she introduces the staggering abundance and diversity of the insect world. This is not a entomological textbook. Rather, this is an introduction to a whole new world intertwined with the world we see every day, but pay little attention to normally. The hardback edition came out in 2018, but the Kindle version is now available and the paperback is due out next year.

Innumerable Insects: The Story of the Most Diverse and Myriad Animals on Earth by Michael S. Engel. 2018.

This book also deals with the insect world, but it does so in a very different way. Rather than get eye-striking photos of living insects, Dr. Ingel scoured the rare book collection of The American Museum of Natural History to find 300 years of insect research. He reproduces lithographs and illustrations from previous researchers and they are beautiful. Exquisite drawings such as these can often do a better job of showing anatomical detail than an image of the insect itself. While he discusses the insects and all the amazing thing about them, he tells the stories of the early entomologists as well. If you are interested in insects and are a history buff, you will like this book. Be warned, at 10″ by 9.3′ and 2.6 pounds, it is hefty, unless you buy the Kindle version. 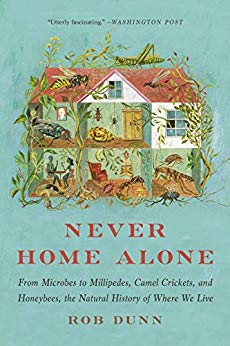 When I first saw this book listed on Amazon, I was wondering how a natural history book would work as an audiobook (there is also a hardback, paperback, and Kindle version). Unlike the others on this list, Dr. Dunn tells his story mostly through the written word, with the illustrations much more sparse and definitely less essential to the book than the previous entries this week. But it is no less intriguing. This book discusses his and others’ research into the creatures that live all around us, living in our homes, mostly unseen. Even in a clean home, there are thousands of insects, microbes, and an array of other creatures. And that’s ok. They belong there. After reading his book, hopefully you will take from it that there is an amazing diversity of life all around you and that, for the most part, sustains a healthy life for you. So don’t panic about all the creepy crawlies, celebrate them as part of a thriving community we all share, because overzealous efforts to eradicate them actually make you sick.

Speaking of life that tends to go unseen, there is a world of life that lives under our feet. Animals live in the soil, crawling through it, making burrows, making their way through the blackness of caves, and generally living life underground. Most people know Dr. Martin for his work on dinosaurs, but he actually does more on ichnology, the study of tracks and traces. He spends his time studying the animals that leave their mark on and in the ground, whatever they may be. And there are a lot. Of course, there are the insects. Everyone is familiar with ant hills, but that is only the beginning. There are the clams and fish that dig into the beach sands, the beavers and other mammals that dig burrows, large animals like bears and giant ground sloths, and yes, even the occasional dinosaur. This book is written for a general audience, so like many of the others on this list, Martin does not just content himself with relaying the diverse nature living underground. He follows a pretty common trope in trying to make the research relatable through personal stories. He talks about his personal experiences. He doesn’t weigh it down by too much technical jargon. It makes the book an easy read and informative for the general reader. It is not a treatise for scholars, but a nice introduction to nonexperts to a world most people don’t think too much about.

This one goes back a couple of years, but I think it is good enough to bear another mention. It is good to remember that we are not individuals, but walking ecosystems carrying, well, multitudes. As we are learning more and more these days, those other creatures are not mere passengers. They affect us in innumerable ways. They are essential for digestion, they change the way we interact with our environment. They even affect the way we think. Ed Yong is a gifted writer and he does a great job exploring the ways we are intimately connected with our environment and the way life in its many forms is intertwined. It has been said no man is an island. I am sure the person who first said that had no idea just how right they were. 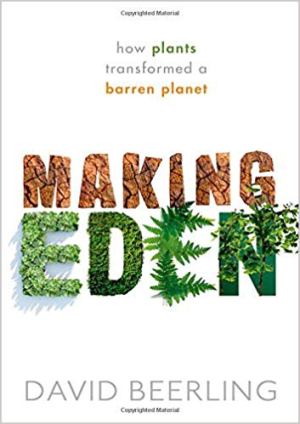 “Our brains are wired to notice animals, not plants,” says Dr. Beerling. Indeed we are. As one can see from the books I have discussed, I definitely fit into that myself. But without plants, animals would not be here. So I think it fitting that I end this particular list with a new book on plant evolution. I have tended to avoid plants because from the first botany class I took in college, it was clear to me they are far more complicated than animals. Anyone who has looked at plant genetics and reproduction knows that plants are hard. Fortunately, we have people like Dr. Beerling taking up the challenge of teasing apart the relationships and relaying it in a manner people like me can understand, for which I am grateful. The history of animal life is inextricably bound to the history of plants. Dr. Beerling does a good job of discussing the evolution of plants and how it has affected the evolution of animals, including us, and why understanding this connection is essential to our well-being as a species.

Come back tomorrow for a new set of books that focus on a singular species, humans.