Home » Paleontology » That’s not a book, it’s a fossil

That’s not a book, it’s a fossil

Unfortunately, I have not been able to get the 13th book list ready for posting yet. So in lieu of that, here is the picture of a fossil, and a warning. Just because somebody says a fossil is one thing when they are selling it does not mean it actually is what they claim. 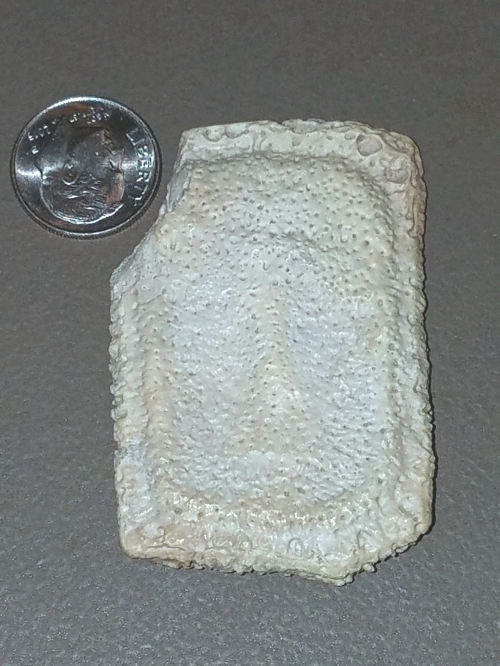 I bought this at a gem and mineral show a few years ago. It was labeled as an osteoderm from a glyptodont. Gylptodonts were large South American animals that were the mammalian equivalent of an ankylosaur. Some were about the size of a small car and had armor plating in a big shell over them. They even had armor on their head and a few species, like Doedicurus, had big, spiky ball at the end of their armored tail. 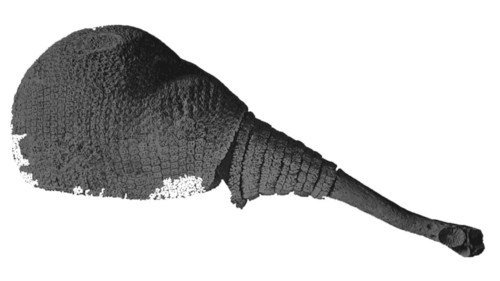 This is a photo of an actual Doedicurus fossil.  From Richard Farina.

However, I do not think what they sold me came from any species of glyptodont, nor from a giant armadillo, as they are often sold as, at least, not in the scientifically taxonomically accurate sense. To many people, all the armored animals were armadillos, but if one wants to be accurate, then one needs to know which animal one is actually talking about. The osteoderms called sold as giant armadillo scutes are generally from the extinct Pleistocene armadillo, Dasypus bellus, also known as the beautiful armadillo. If one wants to be accurate, the term giant armadillo really should only be applied to the living species, Priodontes maximus, also known as the tatou, ocarro, or some variant. It should be noted that glyptodonts are Xenarthrans in the Order Cingulata, along with armadillos, so they are related, but they are in completely different families.

But I do not think this osteoderm belongs to any of these species or even families. I think it belongs to a different group of armored animals, the pampatheres, most likely Holmesina.

Pampatheres are another armored mammal in Xenarthra. Like the others, they are in the Order Cingulata and originated in South America. Unlike most of the others in this Order, they and the ancestors of the modern armadillos escaped South America to invade North America. Holmesina made it as far as Florida, but died out at the end of the Pleistocene, along with all the other armored cingulates, leaving the armadillos as the survivors of a once much more diverse lineage. But, because as they made it to Florida, pampatheres are much more easily obtained by fossil collectors than actual glyptodonts. Why would it be mislabeled? Maybe they didn’t know. Maybe it was because glyptodonts were bigger and more well known, maybe because glyptodonts seemed more impressive and exotic than what looks like an overgrown armadillo. Who knows. Do I feel cheated? A little, but not terribly, it is from a related animal and one that is closer to home and lived in areas that I can more easily get to than South America, making it still useful to me as a teaching specimen, which is what I bought for in the first place.