Echidnas, One of the Weirdest Mammals, I chid you not

Last week I posed this challenge. What real animal combines traits from the kiwi, anteater, and hedgehog. Chase and Herman Diaz came up with the correct answer. 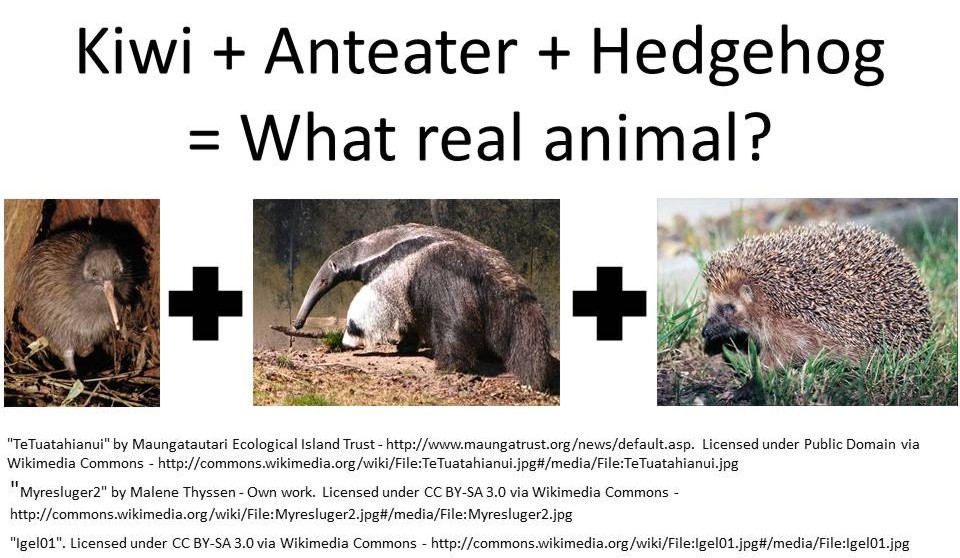 The animal that has the traits of these three animals is the echidna, also known as the spiny anteater. Named for the “mother of all monsters” in Greek mythology, the real echidna looks like a combination of other animals, much like the mythical Echidna herself, who was part woman, part snake. 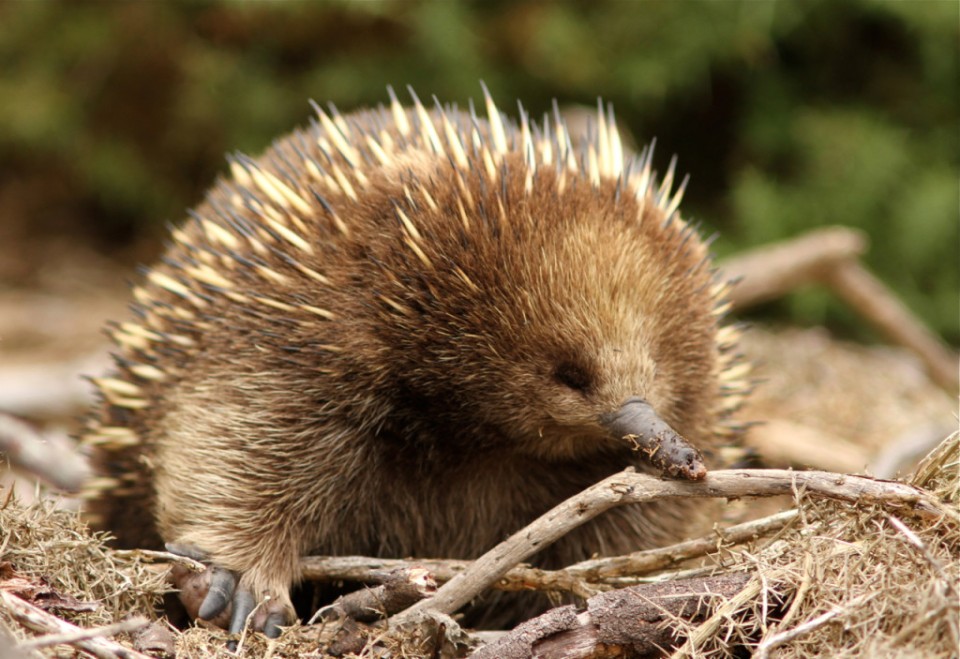 When people think of weird mammals, echidnas are very often at the top of people’s lists. It has several traits that are commonly mentioned. First, it is a monotreme, a group of mammals that lay eggs. Today, monotremes consist only of echidnas and platypuses, but in there were several others in the distant past. Platypuses are so strange that people at first thought it was a fraud. Who would believe an egg-laying mammal with the face of a duck? 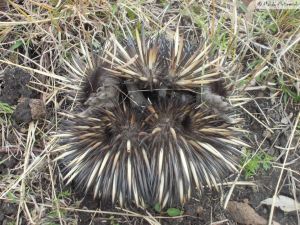 Second is their fur, which has numerous sharp spines, similar to that of a hedgehog. Because these spines are modified hairs, they have limited control of them. Just like other mammals can make their hair stand up (humans know this chiefly as “goosebumps”), the echidna can make its spines stand up, although they can’t shoot their spines like some people would have you believe. 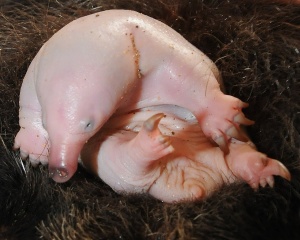 That fact the echidnas lay eggs makes their reproductive system rather different from almost all other mammals. Internet sites always want more people to click on their site, so echidna reproduction gets a lot of discussion. An internet search will immediately turn up comments and pictures of the four-headed penis of the males and the fact that the females have no nipples,  instead feeding their young (called puggles) through glands in their pouches (yes, they have pouches like marsupials) which secrete the milk that the young lap up. You can even find talk of the mating trains echidnas can form during mating season, in which the males form a line behind the female and follow her around for upwards of six weeks until she finally decides to mate. Then they dig a trench around her, jump in and try to push each other out like some sort of bizarre sumo contest. The last male still in the trench wins the right to breed first.

Did I also mention that echidnas only have one opening for their urinary, digestive, and reproductive systems, called a cloaca? http://www.ucumberlands.edu/academics/biology/faculty/kuss/courses/Urogenital/ComparativeUGAnatomy.htm

Much like many reptiles, which have what is termed a hemipenis  (a two-headed penis), the male echidna only uses half of its penis at a time. In the echidna’s case, that means that they use two out of the four heads at any one time, which is good, because the female echidna has two uteruses. We’re still not done with the weirdness. Because the female may mate with several males, the sperm joins into one large mass, a super-sperm if you will, that together, can swim faster and stronger than any of them separately.

There are several traits that the echidna shares with the platypus, in addition to laying eggs. The echidna is edentulous, meaning it has no teeth. It does, however, have an incredibly fast tongue; able to slurp up the ants, termites, and other insects at the rate of 100 licks/minute; thus its name Tachyglossus, which means “swift tongue”. It also has a very sensitive beak that is electroreceptive, meaning it can detect the tiny bioelectrical signals given off by the insects for which it forages. Additionally, echidnas have a spur on its hind legs, although unlike the platypus, it is not venomous.

So what does it mean to be a monotreme? The Tree of Life web project has an excellent and clear summary of what a monotreme is scientifically. Evolutionarily, the monotremes are the oldest true mammalian lineage, splitting off the line that led to placental mammals sometime around 200 million years ago (as a point of reference, the oldest known dinosaur was found in rocks dating to 230 million years ago). Much of what we consider to be mammalian had yet to evolve by this point, so there were still several traits monotremes shared with reptiles that were derived from the common ancestor of both the reptiles and mammals. This split was so early in fact, that the middle ear bones developed independently from other mammals. 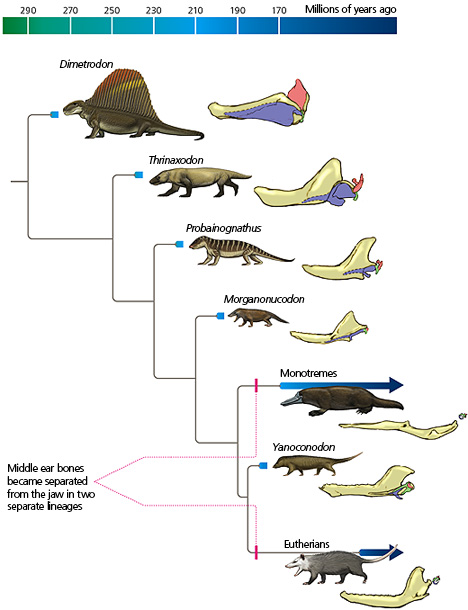 The evolution of the mammalian middle ear. http://evolution.berkeley.edu/evolibrary/article/evograms_05

My personal favorite of all the strange things about the echidna is its thermoregulation. When people think of mammals, besides for milk glands and fur, they think of “warm-bloodedness”. Thermoregulation is far more complex than most people realize. There is much more than “warm- or “cold-bloodedness”. Better descriptions of thermoregulation are endothermy (temperature controlled internally)/homeothermy (maintains constant temperature) and ectothermic (temperature strongly influenced by environment)/poikilothermic (temperature fluctuates). But these are just endpoints on a spectrum. Perhaps no other animal illustrates the variation better than the echidna.

The echidna does it all. At various times, the echidna displays endothermy, ectothermy, homeothermy, and poikilothermy. It hibernates, it goes into torpor on a regular basis. The echidna is also a eurytherm, meaning that it can operate just fine at a variety of temperatures without loss of function or activity levels. Whereas most mammals would lose function and coordination if their bodies cooled even a couple of degrees and would completely shut down if they cooled ten or more degrees, the echidna gets along just find even when its body cools to 20 C (that is 68 F for those in the US, a temperature at which we would be long dead).

Needless to say, it is a heterothermic animal. Heterothermy  is when an animal lets its body temperatures fluctuate. While it is a broad term that includes poikilothermy, it is typically distinguished from poikilotherms by being under the control of the animal and/or by being regional, meaning that different parts of its body have different temperatures. The classic example of this is the deer, in which the legs are allowed to get cold while the body stays warm. African elephants do this somewhat in reverse, shunting blood to their ears allowing them to heat up, thereby dumping heat from their core body to their ears, which can then cool off more readily due to their large surface area. Of course, few mammals can beat the camel, allowing their temperatures to vary as much as 7 C throughout the course of a day. 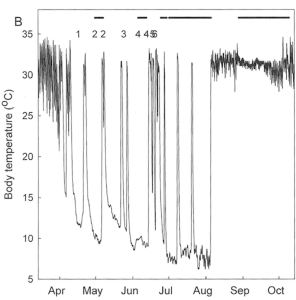 Body temperature of a female echidna throughout one year. From April to August, it hibernated for short bouts, interrupted by short active periods. Note the period of unusually stable temperature. During that time, the echidna is incubating its egg.

Anyway, back to the echidna. Check out this graph. In this study, the researchers measured the body temperatures of a female echidna for 13 years. The graph shows temperature ranges for one year. Another study found that the echidna typically maintained temperatures when active at around 32-33 C (as compared to our 37 C) and dropped to 27-28 at night when it was inactive, although it could drop to as low as 4.7 C and still get up and have normal activity during the day. This variability not only allows it to use less energy, but it also allows it to tolerate temperatures as high as 42 C. Starting the day cold allows it to absorb more heat during the day without overheating. And it is not just its temperature that it allows to vary. The echidna can vary its metabolic rate while still maintaining its normal activity levels. Of course, when it needs a stable body temperature, like for instance, when it is incubating an egg, it can do that too.

All told, the echidna is a pretty amazing animal. It is also about as close as we are going to get in a living animal to see what our mammalian forebears were like in the early years of mammalian existence.

The natural world can be a very strange place. WTF evolution?! is a great site that takes a humorous look at some of nature’s weird turns. Today I am going to celebrate some of nature’s curiosities by playing a game. Some animals are so weird they look like combinations of other animals. For instance, the platypus is often said to look like a cross between a duck and a beaver. I will provide a fictional cross between a set of animals. See if you can guess what real animal it might be. Then come back later to see what animal it is and description of what makes it such a curious animal.

For today’s cross, what might you get if you cross a kiwi (the bird, not the fruit) with an anteater and a hedgehog? I will give you a hint. It is an extant animal, so you can rule out any fossil animals.

Getting Antsy for the Answer to last Week’s Mystery Monday?

Last week we posted a new fossil. Were you able to figure it out?

This particular picture is of the ant, Nylanderia vetula, caught in Dominican amber. Dominican amber is from the Miocene, currently thought to be about 25 million years old. The fossil ants from Arkansas are a bit different.

In 1974, ants were found in amber collected near Malvern, Arkansas, from the Claiborne formation, which is listed as being from the Eocene, roughly 45 million years ago (give or take 3 million years). According to the Arkansas Geological Survey, the Claiborne is a series of fine sand to silty clay layers, with interspersed layers of lignite. The lignite and amber are clearly indicative of terrestrial environments, although there are some marine sediments within the formation. A number of fossils have been found in the formation, including fish and reptile bones and teeth, leaf impressions, trace fossils, and of course, wood and amber.

The specific ants that have been found were identified as Protrechina carpenteri. These ants are in the group Formicinae, one of the more common ant groups. Interestingly, the Eocene ants were anything but common. Ants during this time shifted from the earlier ants to a more modern collection of species. They were quite diverse, with Phillip Ward reporting that David Archibald claimed some of them were the “size of small hummingbirds”. 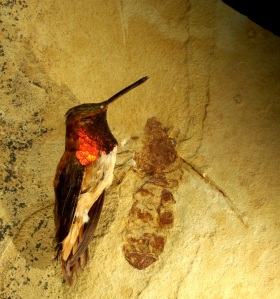 Images of our Arkansas fossil ant are hard to find, as in, I couldn’t find a single image. However, if you want to see the real thing, go to the Harvard Museum of Comparative Zoology, where Antweb.org reports it is being held. Yet another Arkansas fossil in the hands of another state.