Did you know that Arkansas once had catfish more than three meters long and weighing, depending on who you believe, as much as 450 kg? That makes the world record catfish of today look positively puny.

The proof can be found at the Arkansas Geological Survey. The skull of one such monster is on display in the second floor display case. It was found in 1983 off Highway 79 near Camden. The bones were pulled from the Claiborne Formation, or more specifically, the Sparta Sand.

The Claiborne Group can be found in much of the South-Central part of the state, as well as on Crowley’s Ridge. It is Eocene in age (34-56 Mya). According to the Arkansas Geological Survey, the Claiborne is primarily non-marine and is comprised of mostly fine-grained rocks ranging from silty clays to medium-grained sandstones, with the occasional lignitic coal bed. The shales usually have the variegated tans and grays often seen in terrestrial  sediments, with brown and black organic-enriched layers intermixed. Fossils are common from the units, with plant fossils common, as well as trace fossils. Of particular interest here are the reptile and fish bones that have been found here.

The Sparta Sand in particular is a thick bed that can be several hundred feet think. It is a fine to medium-grained sandstone that is typically light-colored, either a whitish or light gray, with thin beds or brown or grayish sandy clay and lignite. It has been considered an important aquifer for the region. The sediment is thought to have been laid down by rivers during a regression of the marine shoreline farther south. In other words, we are looking at the flood plain of a river meandering its way to the ocean, much like southern Arkansas and Louisiana is today. Only back then, the catfish grew much bigger than they do now. 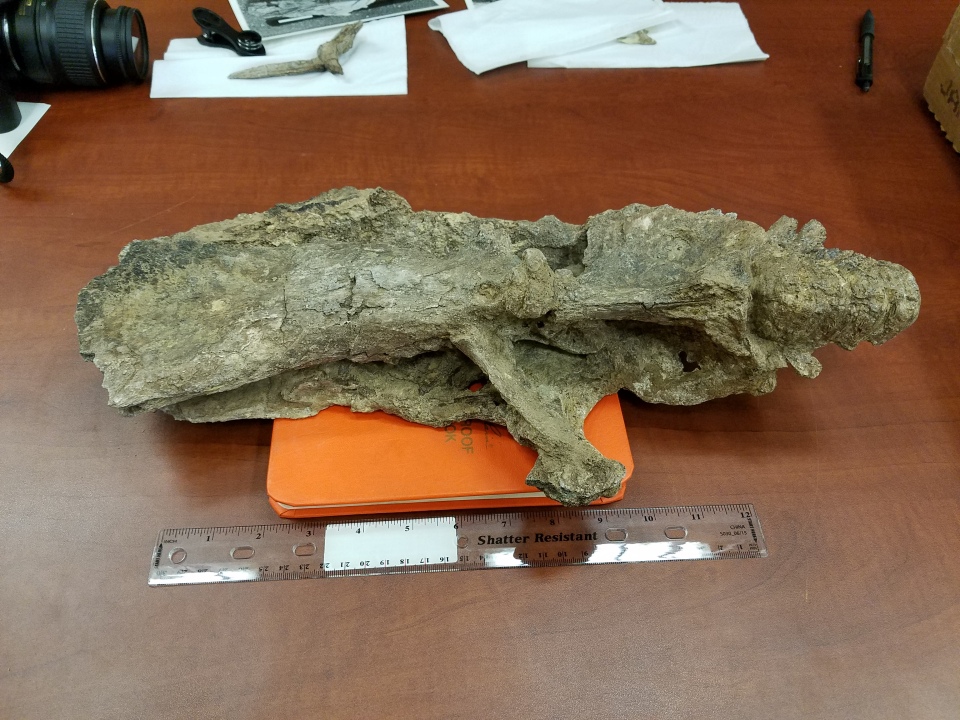 So what do we know of this fish? We know it was a siluriform catfish, most likely in the Ictaluridae family, along with all the other North American catfish. It was probably something like the giant Mekong river catfish and lived in similar environments. The Eocene was warmer than it is now, so it was likely even more tropical than it is today. Beyond that, we don’t know a lot. The fossil has never been fully studied and described as far as I am aware. In 1983, Dr. John Lundberg, a noted expert in fossil catfish and currently chief curator at the Academy of Natural Sciences of Drexel University, corresponded with the AGS about studying it, but thus far, I don’t know what, if anything, came of it.