Fossil Friday, Having a Blast

It’s Friday, which, along with the anticipations of the weekend, means it’s time for the reveal of this week’s Mystery Monday fossil. We’ve had guesses of starfish, aka sea star, and sea urchins. Both are close. Were you able to guess it?

This fossil is of Pentremites, a echinoderm in the group Blastoidea, so a relative of both sea stars and sea urchins. Like them, you would have found them in shallow marine communities in fairly clear water, if they still lived. Blastoids are what you might get if you crossed a crinoid (another echinoderm) with a sea urchin, but we’ll get to that. This particular image was taken by Dr. Richard Pasilk, of the Humboldt State University Natural History Museum. You can find it and many more fascinating images at the Paleoportal.org fossil galleries.

Echinoderms, or “spiny skin,” have been referred to as walking castles because most of them form plates and spines of calcium carbonate that lock together, forming a mobile fortress. Echinoderms include starfish, sea urchins, crinoids, and holothuroids, or sea cucumbers. Echinoderms are known for having tube feet, a part of their water vascular system. If anyone has seen hydraulic mechanical systems, you know how these work, by pumping water in and out of tubes to change the water pressure, allowing the tubes to extend or contract. They don’t have much in the way of nervous or sensory systems, although sea stars do have rudimentary eyes allowing them to see, albeit very poorly. At least some sea stars can turn their stomachs inside out to eat, and sea cucumbers can basically eviscerate themselves, ejecting their guts through their anus, to gross out potential predators. Sea cucumber poop is also very important for coral reefs, so be a hero, save the sea cucumber, save the ocean.

Blastoids grew on long stalks like crinoids formed of many flat disks, but instead of having fairly disordered plates that formed a rough ball-shaped shell called a theca, the plates forming the blastoid thecae were nicely ordered, arranged in a shell that many have thought resembled a hickory nut. This ordered, integrated theca is much more similar to the echinoid sea urchins than it is the crinoids. It has the advantage for fossil hunters that it held together better, meaning that they are much easier to find than crinoid thecae, which pretty much scattered across the sea floor as unidentifiable calcite crystals as soon as the animal died, unless they were killed by being buried. 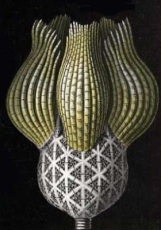 The mouth is located at the top, surrounded by five grooves called ambulacra. Coming off the ambulacra were a series of feathery appendages called brachioles, which would filter particles from the water, much like the feathery arms of the crinoids. Between the start of each ambulacra sat an opening. Four of them led to the respiratory system, consisting of complexly folded structures called hydrospires. Loosely fold a piece of paper a couple of times, then roll it up and you will get an idea what it looked like. Water would flow from the brachioles into your paper hydrospire between the edges of the paper and out the top of the tube. The other one was the anus, so the digestive system was U-shaped, with the mouth and anus adjacent to each other.

The fossil record of echinoderms is extensive, starting in the Cambrian over 540 million years and possibly as far back as the Ediacaran around 600 million years ago. The fossil record of the blastoids is somewhat debated. Whereas some sources say they originated in the Ordovician, most put the oldest confirmed blastoid in the Silurian, roughly 425 million years ago. They became abundant in the Mississippian Period and were persistent members of a diverse shallow marine community until they died out by the end of the Permian Period a little over 250 million years ago, along with most of the world in “The Great Dying.” In Arkansas, as in the rest of North America, blastoids were common and diverse in the Mississippian Period, also known as the Lower Carboniferous Period, although they became rare in the Pennsylvanian, the Upper Carboniferous Period. Arkansas has some of the only Pennsylvanian blastoids in North America. 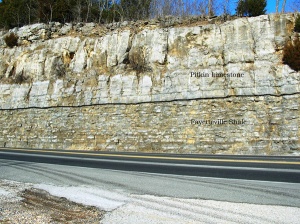 Look for rocks like this. Pitkin Limestone along Hway 65. http://www.geology.ar.gov

If you want to look for them in Arkansas, the best places to go would be the Mississippian age limestones in the Ozark Plateau, such as the Pitkin Limestone and the Boone Formation, and the early Pennsylvanian age limestones, such as the Brentwood Limestone of the Bloyd Formation. Follow Highway 65 north towards Leslie and Marshall and stop at any roadcut through the Ozarks showing whitish rocks and you stand a decent chance of finding them. Just don’t collect in the National Forests and watch the traffic.