We began the week with our first Mystery Monday for paleoaerie.org with the picture of an interesting Arkansas fossil. Today, Forum Friday will become Fossil Friday as well as we identify the fossil. Did you guess what it was? See if you were right below the picture.

Congratulations go to Allie Valtakis, who correctly identified it as a nautiloid cephalopod. This particular one is Rayonnoceras solidiforme. It has traditionally been placed within the Order Actinocerida, although some workers have placed them into the Order Pseudorthocerida, which is known for their resemblance to the more commonly recognized orthocerid cephalopods.

What are cephalopods, much less nautiloid cephalopods, you ask? Cephalopods are the group of molluscs that include squids, octopuses, and cuttlefish. There are three major groups: Coleoidia, which includes almost all the modern cephalopods; Ammonoidea, which includes almost all the extinct ones and are known for their complexly sutured shells; and the Nautiloidea, which are mostly extinct, the only living form is the Nautilus. The ammonoids and the nautiloids both formed shells. What differs between them is how they made them. Some of those in Coleoidia also form shells, but they have been greatly reduced and internalized, such as in squids, or lost altogether, such as octopuses. For those with external shells, they have the problem that shells don’t get bigger once the mineral is laid down, so they quickly grow out of their shells. They solve this by adding mineral to the front of the opening in an ever-increasing funnel, periodically walling off the back of the living chamber (leaving a small opening for the siphuncle that goes all the way through the shell, creating a series of gradually increasing sections.

The ammonoids are well known in the fossil record, particularly the subgroup called ammonites, having a diverse array of straight, curved, and coiled shells. What makes them unique from the nautiloids is the sutures between sections are wavy, sometimes showing astoundingly complicated patterns. The nautiloids, on the other hand, sport very simple, smooth curves. It is this group in which Rayonnoceras belongs. 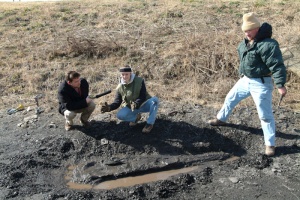 Rayonnoceras lived about 325 million years ago in the Mississipian Period, although nautiloids as a group have been around since the Cambrian Period over 500 million years ago. What makes this particular species so interesting to Arkansans is that the largest nautiloid cephalopod ever found (update: largest pseudorthocerid nautiloid, not largest nautiloid) was discovered near Fayetteville, AR. It was 2.4 m (8 feet) and found in a rock unit named, appropriately enough, the Fayetteville Shale, a unit of dark gray to black shale and limestone, indicative of a warm, shallow marine environment without a lot of sediment input, much like many areas within the Bahamas today.

To recap what we’ve covered over on the Facebook page, we recommended a book discussing misunderstandings in human evolution and another in how evolution affects our health. We saw a hominid fossil hand bone that helped to show how we differed from australopithecines and genetics work that showed us how we didn’t differ from Neanderthals.

We learned how malaria is evolving and why you shouldn’t take medical advice from celebrities. We also bemoaned the airing of a another horrid false documentary about mermaids on Animal Planet. 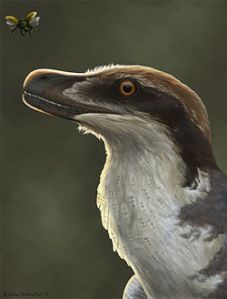 We learned about a new dinosaur named Archeroraptor and new work on dinosaurian growth rates. We also read how the largest volcanic eruption ever caused the greatest mass extinction ever.

We read about genetics work that informed us how flowering plants evolved by doubling their own genes and stealing genomes from other plants.  We learned about a “second code” within DNA and why the hype was bigger than the story, but may help us rethink our DNA analogies.

We saw how birds defend themselves against cheaters and learned the first lizards and snakes may have given live birth. We also got some information on how teaching and testing will need to change under the Next Generation Science Standards.

On a final note, this will be the last post this year on paleoaerie.org. Enjoy the holidays and join us in January, when we will be embarking on discussion of the Ordovician rocks and fossils in Arkansas. Over the spring, we plan on discussing several vertebrate fossils found in the state. There are several books and online resource reviews coming up as well. We will be adding to our Scientists in the Classroom and adding several new resources to the links pages. As always, we will be posting a plethora of current news items on Facebook, so stay tuned! In the meantime, tell us what you liked, didn’t like, want to see more of, and any questions you may have.