Fossil Friday. Soak up some information

Were you able to guess what the image was? It is a common animal almost everyone has at least a synthetic version of in their home. Yet they make terrible fossils. 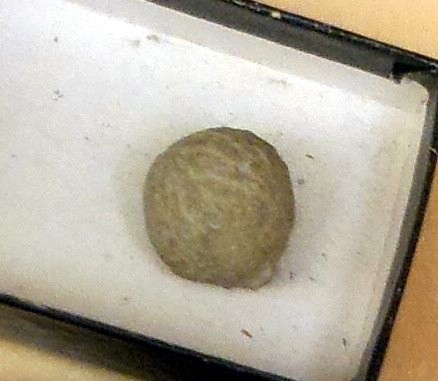 Yes, this is a sponge. It is a small one, but typical for a fossil of a sponge. If they preserve well, they look like little balls, or pancakes (the squished ball sponge), or cylinders. All in all, visually very simple. 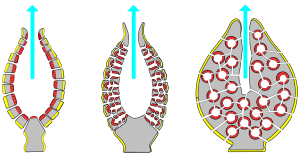 Sponges belong to the the group called Porifera, so named because they have a lot of pores through which water flows through. Even though they may superficially look like some colonial organisms, they are true multicellular animals. Sponges have no true organs, or even tissues, but they do have specialized cells to handle various functions, such as reproduction, producing the materials needed for growing, and cells that act as a primitive immune system. The body organization is about as simple as you can get. Water flows through the pores into a central chamber, which has an opening at the top for water to flow out. As the water flows through, the sponge cells filter out nutrients, generally consisting of bacteria, plankton, and the occasional small animal, and excrete waste products.

Traditionally, sponges have been considered the most primitive of metozoans, the group comprising multicellular animals. There has been some research indicating that comb jellies are more primitive, but that work has been disputed by new research. 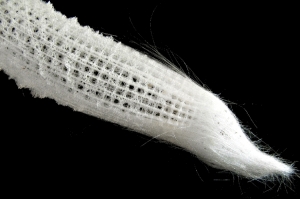 Sponges are normally divided into three different types. Demospongia is the largest of the three (although this may be because it includes sponges that may not be as closely related as typically thought). They form a “skeleton” out of small, pointed cylinders called spicules, made from either silica or a protein called “spongin”. The glass sponges, or Hexactinellid sponges, also make silica spicules, but these spicules are noticeably different from the demosponges. The third group of sponges make their spicules out of calcium carbonate and so are known as calcareous sponges. For more information on sponges, the wikipedia article is surprisingly good, so I will not belabor the points here.

It is these spicules that make fossils of sponges so problematic. When the sponges die, the soft tissues decay away and the spicules become little more than sand. Finding an intact fossil sponge is relatively rare. Thus, the vast majority of research done on fossil sponges is done through painstaking microscopic work on the spicules.

The fossil record of sponges goes back possibly as far back as 750 million years, although they do not become common until about 540 million years in the Cambrian and have been found all over the world. In Arkansas, the record of sponges is rather poor, mostly because very few people have worked on them and no one is looking for them. There are currently only four named fossil sponges and a few indeterminate sponge spicules. 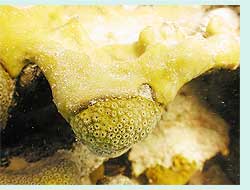 Demospongia is represented by three species. Haplistion sphaericum and Virgaspongia ichnata are demosponges found in the Bloyd Formation in Washington County. The  Bloyd Formation is a Pennsylvanian aged formation found in the Ozark Mountains, a fossiliferous unit consisting of silty shale to massive sandstones, representing a relatively shallow marine environment with fluctuating sediment influx. Cliona, is a Late Cretaceous demosponge found in the Arkadelphia marl Formation in Hempstead County. Cliona is known as a boring sponge, not because it is uninteresting, but because it has a habit of boring holes into shells. This formation is mostly a limey mud best known for its mosasaurs, but also has a diverse assemblage of marine fossils. Stioderma hadra is the long glass sponge known from Arkansas and was also found in the Bloyd Formation.