Fossil Friday, to bear or not to bear, that is the question

It’s Friday again. Were you able to get the answer to Monday’s fossil? 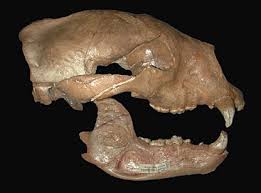 The skull shown in the picture belonged to Arctodus simus, the giant, short-faced bear (the not-so-giant short-faced bear, A. pristinus, was smaller and lived in more southerly areas than A. simus).  Arctodus lived in Arkansas and much of North America during the late Pleistocene, from less than 1 million years ago up to about 12,000 years ago, when most of the large North American Ice Age fauna went extinct. Arctodus was the North American version of the European cave bear, Ursus speleaous. While the European cave bear was a close relative of most modern bears, Arctodus was more distantly related, its only living relative being the spectacled bear, Tremarctos ornatus. It is sometimes considered possibly the largest terrestrial, mammalian carnivore that ever lived, standing over 3.5 m ( 11.5 ft) tall. Even on all fours, it was almost 2 m (6.5 f) at the shoulder. You would have to get at least 4.5 m (almost 15 ft) up a tree to avoid its reach, assuming it didn’t just tear the tree down or shake you out of the tree. It weighed in at a full ton and could run 40 mph (over 60kph).  However, that is also the top range of modern Kodiak brown bears, otherwise known as Alaskan grizzly bears. In the wild, the bears don’t usually get over 1500 pounds (although they can), but the largest ever known was a bear in the Bismarck, ND zoo that weighed 2130 lbs at his death and previously weighed possibly close to 2400 lbs, although he was a very fat bear. There is another bear pelt on display at Space Farms Zoo and Museum  in New Jersey that is claimed to be from a bear over 12 ft. tall and over 2,000 lbs, but those claims remain unverified are considered by most to be exaggerated. There is another bear that may have been even bigger. Arctotherium angustidens lived in South America about three million years ago and stood almost 3.5 m tall, so similar to Arctodus and the largest of extant bears, but was much more robust, weighing in the neighborhood of 3,500 lbs.

Arctodus is generally known for its long legs and short face. However, research in the past decade has indicated that its legs were neither longer than expected, nor was its face all that short. It was simply big.  Like other bears, it is thought to be fairly solitary most of the time. Contrary to many depictions, it was not particularly adapted to running quickly, considering that modern grizzlies can run 30 mph. What may have made people think they were unusually fast is a combination of their size giving them long legs and tracks that have indicated they used a pacing gait, with the legs on the same side of the body moving in unison, rather than in opposition like most other animals. This sort of gait is typically used in animals with longer legs or at faster trots. Camels use it and dogs and cats, among others, do it when maintaining a trot before they break into more of a gallop. However, the pacing gait is not indicative of a fast-running animal, but of an animal that maintains a quick pace for long distances, it bespeaks of endurance, not speed. 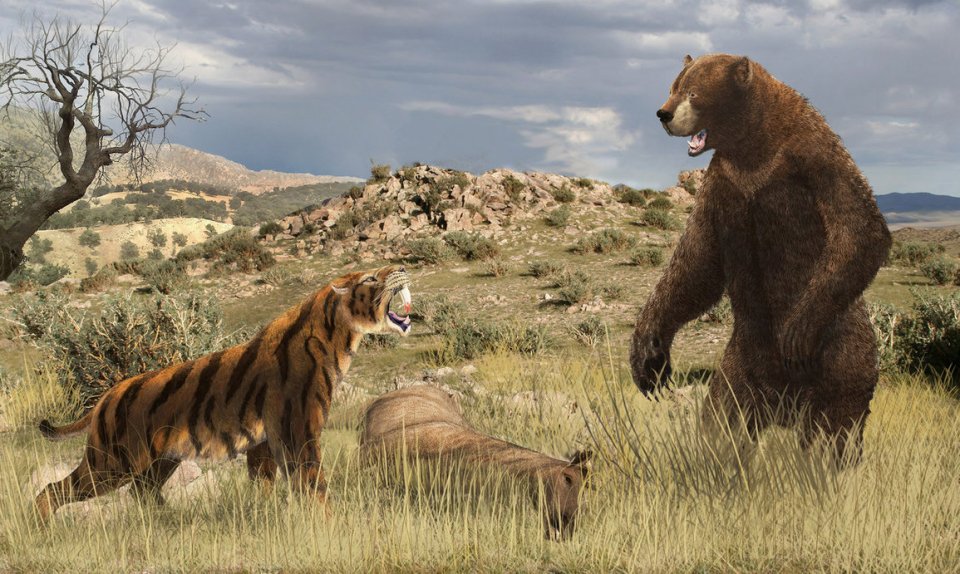 Like most bears, Arctodus is thought to have been omnivorous, eating both plants and animals. There have been several hypotheses concerning its diet, from mostly scavenging to hypercarnivorism. It was certainly capable of bringing down large prey, although its limbs were not as flexible as most high level predators, nor were they particularly robust for their size, leading some to think they scavenged, although they would be hard-pressed to compete with giant vultures in scavenging and recent work indicates the tooth structure was not sufficient for chomping through bone. They may have been better suited for foraging plant material with their unusually flexible wrist giving them an almost semi-opposable thumb, much like pandas. This suggests possible tree-climbing to some workers, although Arctodus was a very large animal to be climbing trees. Besides, it typically lived in more open, grassland environments the majority of the time, so it is unlikely to have been adapted for tree-climbing.

They went extinct roughly 11,000 years ago, along with a large number of other large species. A reduction in rich food supplies is thought to have caused the extinction of the large herbivores. This would have placed a great deal of stress on the carnivores, causing increased competition. The dire wolves lost out to the modern grey wolves during this time, chiefly thought to be a result of the gray wolves being able to hunt and subsist on smaller and fewer prey than the larger dire wolves. This same reasoning would apply to Arctodus as well, which had to compete against both wolves and other bears, for a greater percentage of the share to fuel its larger body. On the other hand, evidence for this hypothesis has been lacking in analyses of tooth wear.

If you want to see more of Arctodus, make your way to the La Brea Tar Pits in Los Angeles. many bones of this bear have turned up from the tar and are on display at the Page Museum.

Arctodus from the la brea Tar Pits at the page Museum. Wikipedia.