Species of the Dead

National Geographic has a website called Phenomena, which is the home to a group of blogs, one of which is Laelops, a blog written by Bryan Switek devoted to paleontology, with a considerable emphasis on dinosaurs. Recently he wrote an essay on Lazarus taxa. That got me thinking about how species can appear to disappear and reappear in the fossil record and the strange and funny ways scientists talk about species, so this post will expand upon that topic and  discuss ways that species can appear to come back from the dead, figuratively speaking.

What is a Species? 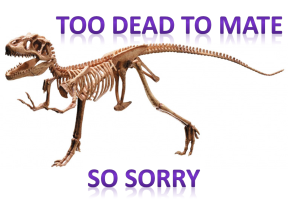 First off, it is important to understand what we mean by a species. Most people think of species using the biologic species concept, which requires a species to be reproductively isolated, the species is defined by who can breed with who. Unfortunately, there are a number of instances in which this doesn’t work. There are species that do not reproduce by having two individuals of different sexes breed, such as some parthenogenic frogs and fish, in which the females create viable eggs without the need of a male. Bacteria, which reproduce by simply dividing, can’t be called species this way, especially since they exchange DNA on a regular basis. Fertile hybrids screw up the biologic species concept as well and are much more common than most people realize. For paleontologists, the biggest problem is that we have no way of knowing how well fossil species could mate because fossils aren’t known for their breeding potential, being dead and all.

In fact, there are at least 26 different published concepts of what a species actually is. As a result, researchers have to choose the one most applicable to their research. Paleontologists frequently use what is known as the morphospecies concept. If it looks sufficiently different, we call it a different species. Are there problems with this? Yes, but we are limited by the data we have. We just have to keep in mind that paleospecies are not the same thing as modern species.

Gaps in the Record

The fossil record is quite good for many types of organisms, not so good for others. As a result, there are gaps in our knowledge. Sometimes a fossil can disappear from the fossil record and appear to go extinct only to reappear millions of years later. These species are called Lazarus taxa (a taxon, pl. taxa, is the name for a generic taxonomic unit, be it species, family, order, etc.). If one is familiar  with the biblical story of Lazarus, the name makes sense. Lazarus died and was brought back from the dead. In a conceptually similar manner, taxonomists can bring a species back from “extinction” by finding more fossils, or, in some cases, living representatives.

Lazarus taxa can be formed a variety of ways. There may simply not be any rocks of the right age where the organism lived to preserve fossils, either through erosion or never having been laid down in the first place. It could be that they simply haven’t been found yet. The organisms could have moved so they are no longer in the same spot. For instance, crinoids at one time lived throughout shallow marine areas and were quite abundant. Almost all of them died out at the end of the Paleozoic. One group survived, but are most common in deep water and are much less common in shallow marine areas, making their fossils after the Paleozoic few and far between.

The most commonly discussed Lazarus fossil is the coelacanth, a fish whose fossil record had ended at the end of the Mesozoic and was presumed extinct, until live ones were caught in the Indian Ocean near South Africa and Indonesia. They were another species which seems to have retreated to deep water refuges to avoid complete extinction.

Come out, We Know You’re There

A related concept is that of ghost lineages. For Lazarus taxa, we know the species was present, we just haven’t found them yet. Obviously, if coelacanths were alive in the Cretaceous and today, they must have lived in between as well. Sometimes the gaps get filled in by discoveries of new fossils, others are still waiting to be found. Ghost lineages cover any situation in which we know a taxon had to exist, but we have no evidence for it, so Lazarus taxa can be thought of as a subset of ghost lineages. For Lazarus taxa, it is that gap between one fossil range and a much later one. But there is also the situation wherein a taxon had to exist much earlier than for which we have a record; and it is in these situations ghost lineages are most commonly invoked.

Suppose we have two taxa that we think are closely related. They had to have then had a common ancestor which lived before either taxa, even if we have no evidence for it. Everyone knows they have a great-great-grandfather even if they don’t know who it is. In the same way, every species has to come from a preexisting species even if there are no fossils proving its existence. It is also devilishly hard to determine an ancestral species (so hard in fact that many researchers view the best course is to just assume we can never do so), so we may even have found it already and just not recognized it as such, but that is a topic for another day. Unlike your ancestors though, the fossil record for related species can be separated by tens of millions of years. This range in which we have no fossil records for the species that existed later in time and for the ancestor itself is referred to as a ghost lineage.

Another weird fossil species concept is that of Elvis taxa. After Elvis died, huge numbers of impersonators appeared. They may look like Elvis, they may sound like Elvis, but they are not Elvis. Species can do the same thing. When one species dies out, they can sometimes be replaced by a species that fills the same niche and may even look superficially similar, but they are unrelated. When two or more species develop in the same, at least superficially, ways, we call that convergent evolution. The pangolin, anteater, aardvark, and echidna (the spiny anteater) are all similar with similar lifestyles, but none of them are closely related to any of the others. If we apply this convergence to the fossil record, we can sometimes find a species that goes extinct, but is replaced by another species that fills the same niche, thus impersonating the previous taxon. If the two taxa are separated by time, they might appear to be Lazarus taxa, but they aren’t really because they are not the same species.

Bring Out Your Dead

Then there are the zombie species. Zombies are taxa that have gone extinct and fossilized, but the rocks encasing the fossils gets eroded. Sometimes, the fossil can then get reburied in new sediment, which becomes lithified, forming a new sedimentary rock layer. The fossil then appears to be the younger age of the new rock even though it is in reality much older. This can happen most commonly with teeth because the enamel is very resistant to weathering. So if you find isolated teeth, they may not have actually originated in the rock in which you found them. You may have just found a zombie. A number of such zombies, or reworked fossils, have been found in the form of dinosaur teeth in the early Paleocene, after the mass extinction event that wiped out all the nonavian dinosaurs. 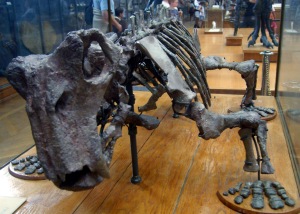 Lystrosaurus, Survived the greatest extinction of all time, for a while. Wikimedia.

Finally, there is the Dead Clade Walking. These are species that are extinct, they just don’t know it yet. This can happen after a mass extinction in which most species die out, leaving a few stragglers, which limp along for a while, but eventually succumb. After the Permian mass extinction, anomodont therapsids, the most famous being Lystrosaurus, survived the extinction that killed so many others  Unfortunately for them, the group did not thrive, instead dwindling down until they too went extinct (if one follows the dinosaur teeth, you will find discussion of a possible dinosaur dead clade walking example). Lystrosaurus itself did spectacularly well and survived well into the early Triassic. So well, in fact, that that some places even have a “Lystrosaurus zone” because of all the fossils of them in the layer. As a result, Lystrosaurus is often called a “survivor taxon”.  Even so, it too dwindled and went into the west, went extinct. A better group that deserves the survivor label is the cynodonts. They were minor players in the Permian, but after the great extinction event, they prospered, taking over the world in the early Triassic, at least until they crashed in the late Triassic and were replaced by the dinosaurs.