Home » Paleontology » Fossils of Arkansas » Fossil Friday! Today we’re being a stick in the mud.

Fossil Friday! Today we’re being a stick in the mud.

On Monday, we posted this picture of an Arkansas fossil. Were you able to figure it out?

This is a fossil of Calamites (watch your spelling, we want to avoid any calamities). Calamites was a relative of the modern-day horsetails, Equisetum. But unlike today’s horsetails, which are generally only a meter or so in height (although some giant horsetails can grow up to 7 meters or more), Calamites grew up to 30 meters (100 feet). 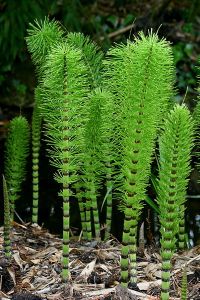 Equiseta often grow clonally, spreading the rhizomes widely through the surrounding ground, forming large clumps of plants that are essentially the same plant, connected via their roots. Assuming Calamites did the same thing, it has been estimated “they may have been the largest organisms that ever lived.” This group of plants is unique in the incorporation of silica into their stems, giving rise to one of their common names being scouring rushes.

This group of plants first appeared in the late Devonian, but really had their heyday in the Carboniferous Period, although they died out soon after in the Permian. The Carboniferous is so named because most of the world’s coal was formed during this time. The reason for this is because of the difficulty in digesting plant matter. Cellulose, the primary ingredient in plant cell walls and what we call “dietary fiber.” Even today, other than fungi and some bacteria, there is precious little that can break it down. Lignin, the other main component of plant cells walls, otherwise known as “wood,” is even harder to break down. 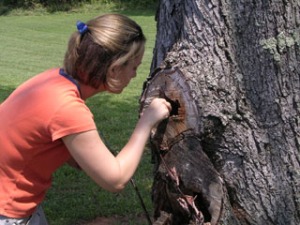 And they think they have a termite problem. http://www.ces.ncsu.edu

The only thing that can really digest it is white rot fungi. Back then, there was little to nothing that could eat it. As a result, dead plant matter tended to sit around for a very long time, making it much more likely to accumulate and form coal. Once the enzymes needed to break down lignin evolved, white rot fungi found themselves with a hugely abundant food supply and acted like teenaged football players after a game at an all-you can-eat buffet. And thus ended the Carboniferous Period, in a massive bout of white rot.

Like modern horsetails, Calamites preferred wet soils around rivers and lakes, cropping up all over the world. While they avoided the standing water of the swamps, they flourished any place that regularly got wet, so levees and floodplains were good environments for them. There were no angiosperm trees at that time, what was there were forests of giant Calamites and ferns. Plants called lycopods, most commonly Lepidodendron, dominated the swamps along with the ferns, which were pretty ubiquitous. 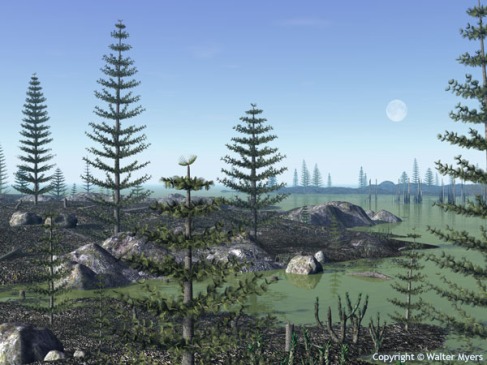 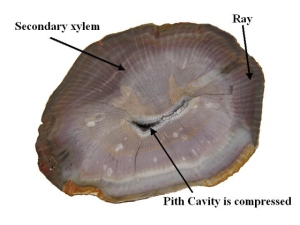 Calamites’ modern counterparts are all herbaceous perennials, so Calamites is unique in the group for having a woody trunk. They form extensive underground rhizome networks, growing large clumps of clones from the rhizomes. The leaves form regularly spaced whorls around the stem, creating the horizontal lines breaking up the ridges running vertically up the trunk on Calamites. Inside, the xylem forms rays running from the exterior to the pith in the center. Oftentimes, the pith rots away, leaving a cavity that gets filled with sediment, forming an internal cast, or steinkern. 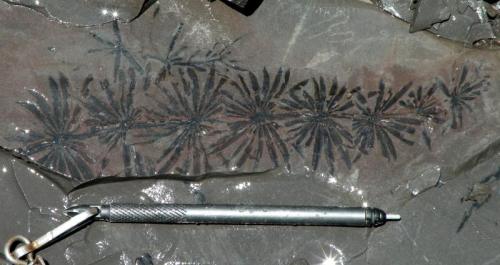 As a plant fossil, anyone can legally collect Calamites fossils as long as they are not on National Forest property (nothing is allowed to be collected in National Parks and Forests). Good places to look for Calamites would be among the Pennsylvanian (Late Carboniferous) rocks in the Quachitas and Ozarks. While Calamites may be found in rocks of Mississippian (Early Carboniferous) age, the rocks in Arkansas from that age are primarily marine. Good for finding sea shells, but land plants like Calamites are going to be rare, only there as a result of being washed in by a storm or some such. You will be much more likely to find them in rocks like the Atoka Formation on both sides of the Arkansas River Valley. Most of the Ozarks is Mississippian, but much of the Ouachitas is Pennsylvanian, so are much more likely to have them. You might find them in the Hartshorne sandstone (seen best capping Petit Jean Mountain), but plant fossils are rare and fragmentary. You would have better luck in the McAlester Formation overlying the Hartshorne. You can also try the Savanna and Boggy Formations, which are also of Pennsylvanian age. 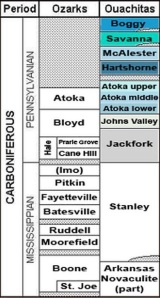 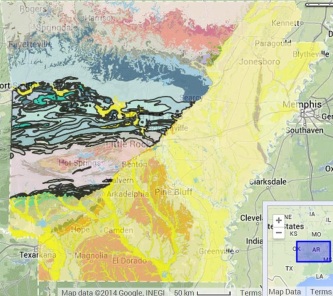