Taphonomy Tuesday? What the heck is taphonomy, you ask? Taphonomy is the study of burial processes and all the changes that take place betwixt death and being collected as a fossil. One might also include the effect of sexiness in what fossils get studied and forgotten about, way more people are interested in tyrannosaurs than fossil mosquitos, for instance. Change comes to all things and paleoaerie is no exception. You may have noticed that the answer to Monday’s mystery fossil did not get posted on the blog last week, although it was posted on the Facebook page. That will be rectified today. But first, a couple of pieces of news.

Mystery Monday and Fossil Friday will be suspended for the summer so I can work on other aspects of the website. I would like to make some different posts and add more to the site. however, for those of you who are primarily interested in the fossils, they will return along with school, teachers, and homework, although hopefully a bit more fun than either doing or, even worse, grading homework (trust me, having been both a student and teacher, grading is almost always more painful than doing the assignments). In the meantime, you can look forward to more varied posts, the addition of a couple of things, such as a techno page for recommended apps and multimedia and an Amazon store in which you can peruse recommended items (and in a small way support the work of paleoaerie, which while free to you, is not to me). So I hope you will stick with me through these Darwinian changes and avoid the pitchforks and torches (ed. note: in keeping with the medieval theme of the picture, I thought about saying burning faggots, but so few people these days know that in olden times, faggot simply meant a bundle of sticks, language too evolves).

The other big news is that I have started a collaboration with the Museum of Discovery in Little Rock to host a celebration of National Fossil Day in October. I am really looking forward to it and, between me and the museum educators at the MoD, we have a lot of ideas for things to do. I hope everyone can come out and enjoy the festivities and learn about fossils in Arkansas and beyond firsthand.

Now, for that fossil…Did any of you recognize this as the skull of a mosaaur, specifically that of Platecarpus? To picture a mosasaur, imagine a komodo dragon, replace the feet with flippers, and compress the tail so it is taller than it is wide (aka laterally compressed) so it looks more fish-like than lizard-like, and you have a pretty good view of a mosasaur. There is a reason for that. Komodo dragons are part of a group of lizard called monitor lizards, which are thought to be close relatives of mosasaurs and so are likely an excellent model for what the ancestral animal of mosasaurs looked like before they became aquatic. 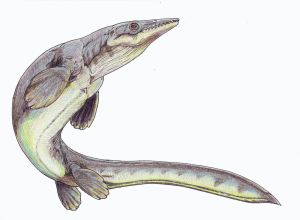 Platecarpus was a carnivorous marine reptile that swam in the Cretaceous seas. While dinosaurs like Tyrannosaurus rex and Triceratops roamed the land, Platecarpus and its relatives patrolled the oceans. This is one of the most common mosasaurs, so much of what we know about them comes from fossil of this genus. It was smaller than many of the other mosasaurs. Some, like Kronosaurus, could reach up to 17 meters, but Platecarpus only averaged around 4-7 meters. Its name means “flat wrist,” alluding to the flippers, although it hardly distinguishes them from other mosasaurs in this regard. What did make them stand out from the other mosasaurs was a relatively shorter snout with eyes that faced more forward, so it probably had better stereoscopic vision, that is, it had better depth perception than most others of its kind. This may be why it had a shorter snout, to prevent the snout from blocking its field of view. Like other mosasaurs, Platecarpus had two rows of teeth on its palatine bones, forming the roof of its mouth. This arrangement actually isn’t all that unusual in lizards and snakes, it is really common in fish. The teeth (all of them, not just the palatal teeth) were pointed and conical, although not as sharp as some of its kin, indicating it went after small, soft prey, like small fish and soft invertebrates like squid or perhaps even jellyfish. They could have gone after larger prey like crocodilians do, but unlike crocodilians which have a strong skull capable of withstanding the forces of ripping a prey item apart, Platecarpus had a much weaker skull which would likely not have stood up to the stresses of the crocodilian death roll (this is when they grab a limb and spin until the limb is ripped off, the moral of the story is of course, never dance with a gator). The overall shape of Platecarpus is stockier than most mosasaurs. This would have had the effect of decreasing surface area relative to body weight, which could have increased its metabolism by holding in heat better. 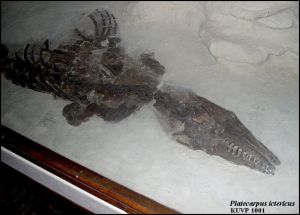 One of the things that makes Platecarpus as a genus so interesting is the fossils that have been found with soft tissue preservation. In one, along with parts of the skin, parts of the trachea (windpipe) were preserved. Originally, they were interpreted as part of a dorsal fin, thus all the early pictures of mosasaurs with fins along their backs. However, it was quickly discovered what the traces really were. To his credit, Williston, the scientist who had reported in 1899 the traces as a dorsal fins was the one who published another short paper three years later saying he had made a mistake and the fossil really showed the cartilaginous rings found in trachea. The tracheal rings have also been interpreted as showing the branching point between the two lungs, which is important because it answered a question about their origins. Every researcher agrees that mosasaurs are lepidosaurs, the group including lizards and snakes, but what wasn’t known was whether or not mosasaurs were derived from aquatic lizards or from snakes. The discovery of a trachea showing two lungs confirms the origin within lizards (snakes only have one lung). It may still be that snakes evolved from mosasaurs, but that is not very likely.

The other piece of soft tissue that has been found is the outline of the tail showing a lobe on the tail forming a very shark-like tail. Until this time, many people had thought the mosasaur swam with an eel-like motion, but the tail and the deep caudal fins indicate a much faster shark-like swimming motion. This in turn has caused people to reevaluate the view they were slow ambush predators, supporting a more active predatory forager. Whether or not other mosasaurs had this fin is currently unclear, so there may have been specializations within this group not seen in the larger mosasaur family. Another such example is the discovery of what has been interpreted as thicker eardrums, which may have allowed them to dive to deeper depths.

The southwestern corner of Arkansas was at the edge of the Late Cretaceous Western Interior Seaway, so we have several fossils of them in places like Clark, Hempstead and Howard counties, although you can find them all over the world in the right type of rocks. You can find them in the Brownstone and Marlbrook Marl Formations. These formations are indicative of warm, shallow seas, much like the Bahamas today, which considering the locations, shouldn’t come as too much of a surprise to people. If you were taking a nice vacation on the warm Cretaceous beaches 80-85 million years ago, you might have tried fleeing into the water to avoid the dinosaurs on the beach, but you would have been no safer in the water.

I would like to thank Rachel Moore, who supplied a lot of the research involved in putting this post together.

By paleoaerie in Fossils of Arkansas, Mystery Monday, Paleontology on May 27, 2014.
← The ethics of fossil collecting Best Introduction to Evolution Textbook →