Home » Reviews » Book reviews » The Griffin and the Dinosaur

The Griffin and the Dinosaur

The Griffin and the Dinosaur by Marc Aronson review summary: Get it. put it in your library collections. It has science, history, sociology, and documents the efforts of the researcher so people can see how ideas are put together, all in an easy to read, accessible format. There is even a free online education guide, with classroom activities matched to sixth grade common core standards. Highly recommended for elementary and middle school libraries. To see why, read the full review below.

The Griffin and the Dinosaur: How Adrienne Mayor Discovered a Fascinating Link Between Myth and Science.

by Marc Aronson with Adrienne Mayor. Illustrated by Chris Muller 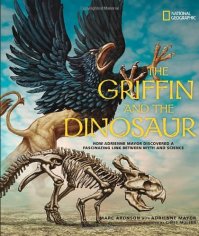 If you are looking for a book about dinosaurs or myths, get another book. But if you are looking for a book about how myths are made and how dinosaurs play into that, this is a great book. The story here is one of cultural interpretations of the natural world. Before people knew about dinosaurs, they found their bones and tried to explain them as best they could according to their worldview. This book tells of the search by one woman to unravel the origins of myths with the hypothesis that they began as most stories do, with a kernel of truth.

Adrienne Mayor has written two influential books, called The First Fossil Hunters and Fossil Legends of the First Americans, in which she lays out all her evidence to support the idea of dinosaur bones being the kernel of truth upon which some of the myths from the ancient Greeks and Romans and the native Americans were built. However, these books together run almost 900 pages, which, while interesting to the serious student, are a bit out of reach for the casual reader. The Griffin and the Dinosaur makes an excellent introduction to this work that is accessible for anyone who can read beyond the basic learning to read books.

Marc Aronson has written several books for children and young adults, mostly relating history in a way that people will actually read. The writing is clear, easy to follow, and relatable enough to keep most readers engaged. The book is illustrated with numerous photos of archaeological artifacts, historical photos and drawings, and the occasional dinosaur. There are too few dinosaurs for my taste, especially for a book with the word dinosaur in the title, but the book is focused on the history and myth interpretations, not dinosaurs. The photos are supplemented with illustrations by Chris Muller, which add to the feel of the book, connecting the bones to the imagination.

The book is split into eight chapters, each only a few pages long. The first chapter, “Prairie Girl”, describes Adrienne Mayor’s childhood and her developing interest in nature and ancient myths. The second chapter, “The Sound of Heat’, finds Adrienne in Athens studying ancient Greek manuscripts in Athens. I’m not too fond of this particular chapter. In a chapter only three pages long, two pages are taken up mostly describing the conditions of the library in which she studied. Only on the third page does Aronson talk about griffins and Mayor’s question about what kind of fossil animal might have inspired it. The last paragraph of the chapter tells of her discovery of the “monster of Samos”. 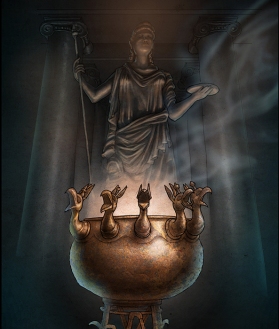 “Sketching Griffins”, the third chapter, describes her discovery of ancient bronze griffins on Samos, but only giraffe bones for the monster, which could not have inspired the myth. It does answer a question I have long wondered. How did an obviously wingless dinosaur become the winged griffin? The answer to that lies in the very earliest depictions of griffins, which did not have wings. The wings were added later as the myth of the griffin grew and became more fanciful. The other thing I like in this chapter is the discussion of search images. When people have an idea in their head of what something should look like, it aids them in identifying it quickly, but it blinds them to possibilities outside that image.

Chapter four deals with Adrienne changing her search image by more study of the development of the griffin myth through history as well as any connections others had made, which led her to the work of Othenio Abel, who had asserted the cyclopean myths came from mammoth skeletons.

Chapter five continues her search for the historical origins of the griffin tale. During this time, she discovers Triceratops, which she thought might be the kernel of truth behind the myth. This is a nice chapter because it shows that even big, embarrassing mistakes does not mean that one should give up. They merely teach you what you need to learn next.

“The Secrets of the Flaming Cliffs”, chapter six finally introduces Adrienne to Protoceratops, a small, beaked dinosaur that was found associated with eggs in a nest. It had a small frill and a long scapula, or shoulder blade, which could have been mistaken for a potential wing support. At least, it could if someone didn’t know very much about anatomy, which includes most people.

The last two chapters deal with the publication of her work and her continuing research into other myths and legends. It ends with a reference back to expanding our search images to find the truth behind the stories.

The book ends with few nice addendums. There is a map of the world showing where things mentioned in the text were found. There is a page of suggestions for further reading, which include her other books, books for younger readers, and online resources. A combined glossary and index covers the more challenging and interesting words. The book wraps up with a page about Marc Aronson and how the book came about.

So to sum up, there is precious little dinosaur and a whole lot of griffin in this book. But it does a wonderful job of depicting a personal story about how dinosaurs have played a role in the development of our cultural beliefs. It also serves as a reminder that we should not dismiss stories as pure fantasy. Strip away the fantastical and you may find something real underneath.

By paleoaerie in Book reviews, Myths and misconceptions, Reviews on February 3, 2016.
← Questions from Students Mystery Monday, a Sticky Wicket →