No one hazarded a guess on the puzzle posted last week. It’s an interesting animal I found most curious. Here is the puzzle again.

The animal this refers to is often referred to as a bearcat or occasionally bearweasel, although it is neither a bear, nor a cat, nor a weasel. Of the three, it is most closely related to the cats. What I am talking about is the binturong, aka Arctictis binturong. 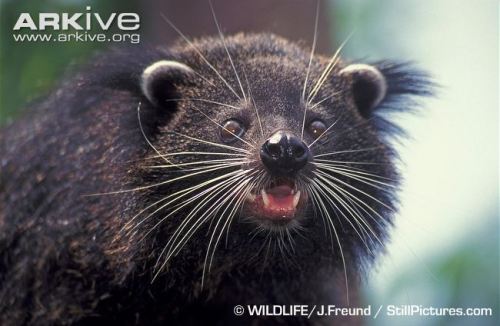 Binturongs live in the tropical rain forests of southeast Asia and are viverids, along with civets, linsangs, and genets. If you’re like most people, you may have a vague recollection of what a civet might be and no idea at all what linsangs and genets are. Fortunately, Toni Llobet has very helpfully illustrated them for the Handbook of the Mammals of the World, Vo1. 1: Carnivora, in 2009. He’s done a huge number of excellent illustrations for that text. If you are at all interested in mammal diversity, it is worth checking out. 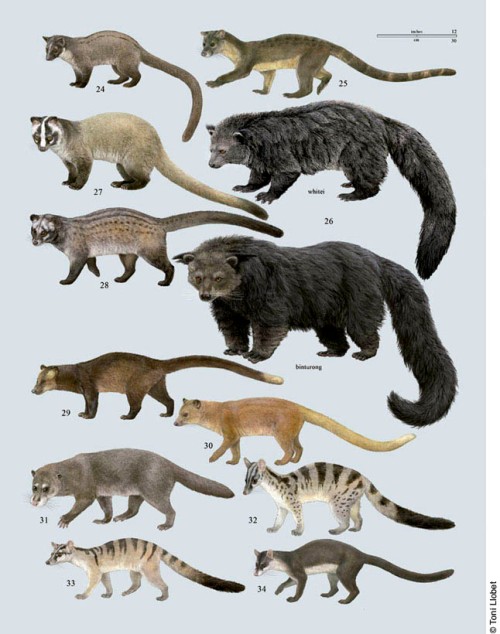 Binturongs look tough and surly, with bushy black or brown fur with whitish or rust-colored highlights giving them a grumpy old man kind of look. They are in the Order Carnivora, so that would seem to fit, but in reality they tend to spend their days sleeping and their nights ambling around the trees looking for fruit. While fruit is their favorite, they aren’t too picky, and will pretty much anything they come across that doesn’t run away fast enough, which doesn’t have to be that fast because the binturong isn’t going to bother chasing down a meal when pretty much everything qualifies as a potential meal.

Binturong skull. Look at those teeth! Picture from Skulls Unlimited.

Many mammals use scent to mark their territory and to advertise and often have particular glands to make oils that carry the scent. Binturongs have an unusually distinctive smell. It is said they smell like buttered popcorn. The San Diego Zoo has a nice web page about them (which served as the main reference for the last two paragraphs) if you want to read more about them.

I said earlier that Binturongs are often referred to as bearcats, and occasionally as bear weasels. This is one of the things I find interesting about them because, other than all of them being in the Order Carnivora, none of those four are related. There is some debate as to the precise relationships within the carnivorans, but all the hypotheses put these animals in separate clades, or groups.

Before I get into this, there are a couple of things I want to clarify for the non-phylogenetically trained readers. A species can also be called by a more general term called a taxon. A taxon (plural taxa)  is simply a species or group of related species. Mammalia is a taxon that contains all the mammalian taxa. If a researcher uses a method called cladistics, which almost everyone these days does, every taxon above species can also be called a clade. This was done to get rid of trying to come up with names for all the different ranks. When you got really detailed, it got kind of ridiculous having Sub-infra-super-supra-mega-gigantor-gonzo-teenytiny…attached onto everything. The number of prefixes could get absurd. It also gave people the false sense that things like Families or Orders actually meant comparable things when in reality they meant nothing at all, yet people still insisted on comparing them as if they meant the same things. A family of insects has little evolutionary similarity with a family within mammals and should not be compared. Taking away ridiculous names lessened (but sadly did not stop) the proclivities of people to do silly things like that. All these relationships can be mapped onto what is called cladograms or phylogenetic “trees”.

Now that everyone understands all that, it is important to understand that when scientists talk about carnivores and carnivorans, they are talking about two entirely different things, which, I know, is stupidly confusing and the scientists who are responsible for this should be slapped soundly and I humbly apologize. Carnivores refers to animals that eat meat as their primary diet. It has nothing to do with their relationships to one another and this is the way most people think about the term carnivores. Wolves are carnivores, just as are sharks, even though one would have to go very, very, very far back to find a common ancestor. Carnivorans, on the other hand, are those animals within the the Clade Carnivora. These animals include all animals more closely related to cats and dogs than anything else, including hyaenas, bears, seals, pandas, weasels, raccoons, skunks, and many other animals, including viverids. Carnivora is based on relationships, not diet. Thus, not all carnivorans are carnivores.

Now that I have gone through all that, binturongs are omnivorous, not carnivorous, carnivorans. As I stated earlier, they belong to the clade Viverridae. How do they relate to bears (Ursidae), cats (Felidae), or weasels (Mustelidae)? It is a bit of a debate, but they are closer to cats than the others. The first thing to know is that clade Carnivora is generally split into two major groups: Feliformia, the cat-like animals, and Caniformia, the dog-like animals. Here is a supertree published in 2012. A supertree is basically a compilation showing the consensus of a whole bunch of published trees of different parts. Each species that is added to the list increases the number of possible relationships exponentially, so trying to make a tree that shows all the species of carnivorans gets mathematically hideously complex. So people study their favorite group within Carnivora and then a supertree is put together with all of them together. 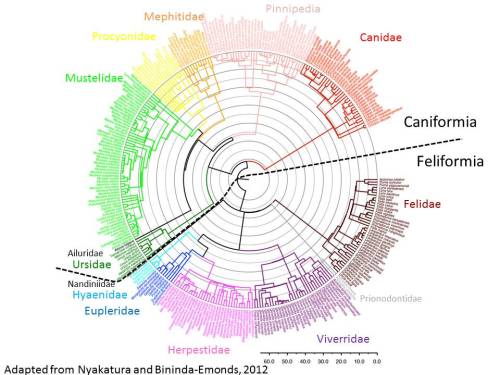 Nyatura and Bininda-Emonds chose to make their tree in a circular format, which is popular for including a large number of species, but is unfortunately the most difficult format for people to understand. It works just the same as all the other trees, it is just bent around and following the lines connecting the groups may be difficult for some.

At any rate, all the clades making up Caniformia are above the dotted line, which I added to hopefully make this easier to read, and all the clades in Feliformia are below the line. Viverrids, including our friend the biturong, is in purple at the bottom, most closely associated with groups like the Hyaenidae (hyaenas), Herpestids and Eupleridae (mongoose, fossa, and meerkats),  and then of course, less closely, the felids. The bears and weasels are both in Caniformia and quite far removed from the biturong.

Here is another view of the data in a much simpler format to understand, published by Blaire Van Valkenburgh et al. in 2014. 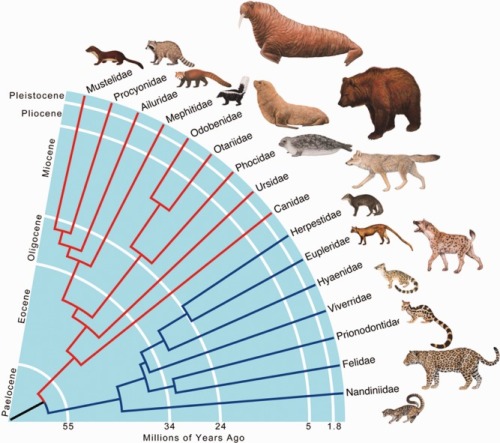 Other phylogenies may differ slightly by placing the viverrids a bit closer to the prionodontids and felids than hyaenids, but most everyone agrees that is the general area they belong. From this it is quite clear that viverrids are their own thing and only superficially resemble any of the animals they are often referred to as, but evolutionarily, they share a much closer common ancestor with cats than they do with either bears of weasels. So they aren’t bear-like cats, or cat-like bears, or weasel-like, bear-like cats. We humans just like to say it’s like this crossed with that to fit it into our neat categories of memory. If we really wanted to be accurate, we would call them mongoosecats or hyaenacats, or maybe even more accurately cat-like mongoose.