Home » Reviews » Book reviews » The 12 Days of Books to Buy for Your Science Readers: On the First Day of Book Lists…

The 12 Days of Books to Buy for Your Science Readers: On the First Day of Book Lists…

It has been a long time since I have written anything for Paleoearie. I have not given up or abandoned the site. I just had to take a sabbatical. I apologize for leaving the site fallow for so long. But, for now at least, I am back and hope to be putting out more stuff soon. If all goes well, I  will continue to be adding new stuff to the site on a regular basis.

To celebrate my return to Paleoaerie, I thought I would start with a series for the holidays. Between now and Christmas, I will present to you 12 days of book recommendations for your science friends or just to put under your own tree as a present to yourself.  So without further adieu, I present to you, on the first day of book lists, dinosaurs, because of course.

Luis Rey is one of my favorite dinosaur artists of all time. His work is always imaginative. He brings dinosaurs to vivid, colorful life better than anyone in the business. Luis also spends countless hours studying fossils and talking to experts to get the science right and then goes the extra step to push the boundaries to provide something beyond the ordinary. Mark Witton, a fabulous artist and respected paleontologist in his own right, has written a thorough review of the book here. I will simply say that if I was buying just one book this year about dinosaurs, this would be it.

The Story of the Dinosaurs in 25 Discoveries: Amazing Fossils and the People Who Found Them by Donald Prothero. Columbia University Press, 2019. ISBN: 9780231186025 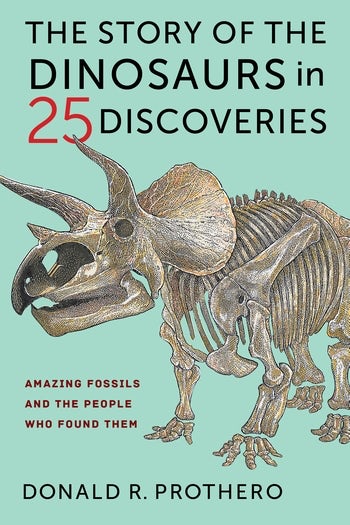 Dr. Prothero is a renowned paleontologist who has written a number of interesting and thoughtful books for the general public. His latest book covers the history of dinosaur research through the stories of 25 discoveries, discussing how the fossils advanced the study of dinosaurs, as well as the people who worked on them. This book shows how the science evolved through both scientific discovery and the human element behind it. It should make a great read for someone just getting into dinosaur paleontology as a science and beyond the “T. rex is cool!” phase (don’t get me wrong, they are undeniably cool, but there is so much more beyond that). Covering fossils from the first Megalosaurus  find to Sinosauropteryx, you will find the favorites here in their historical context, as well as more recent fossils that had a major impact. This should give your budding paleontologist a thorough grounding to begin their quest in earnest. 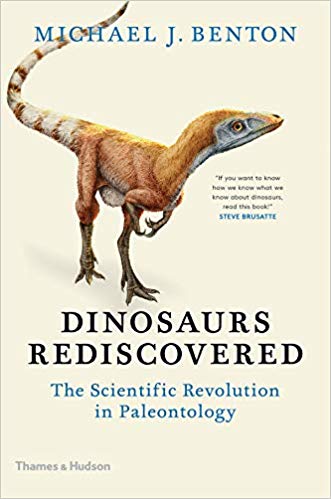 If your dino enthusiast is up to speed with the major finds, it is time to get into the real meat of the science. Dr. Benton is a titan in the field of dinosaur paleontology, publishing prolifically and overseeing the work of numerous other workers. His latest book gives a nonspecialist a great introduction to what the science of dinosaur paleontology is up to these days. While many people think of paleontologists spending their lives in the field digging up dinosaurs bones, that is only the first step in a long road to discovery. To truly understand what the fossils can tell us, that requires intensive work in the lab and there is none better than Michael Benton to lead you through the lab and show you all the wonderful things that can be learned, what we are learning, and what things are still to learn.

Dinosaurs are certainly the most famous prehistoric creatures, but they are far from the only ones. DK Press has put out numerous fascinating books on prehistoric animals, but my favorite has to be their Smithsonian Series. The books are meticulously researched and are packed with amazing graphics and stunning pictures of real fossils. This book appears to be a revamped and updated version of their Prehistoric Life: The Definitive Visual History of Life on Earth, which came out in 2009, which, if you have seen that book, it is a tome, guaranteed to fill many hours with wonder and awe. This book is clearly more focused on dinosaurs than the previous book, but it does not skimp on other animals. So if you want a book that gives you tons of dinosaurs, but also puts them in their place among the history of animals, this is a book for you. Of course, if all you want is dinosaurs, then try DK’s Dinosaurs: A Visual Encyclopedia. The 2nd edition came out in 2018. 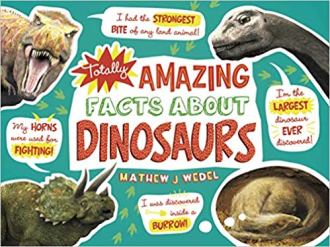 The last book I want to discuss today is a book that came out last year written by Dr. Matt Wedel. Wedel is a paleontologist specializing in the biggest of the big. He studies sauropods, those giant, long-necked dinosaurs, and all things huge and terrestrial. One might even say he is a big kid who matured, but never grew up. As such, he is a great person to write a book for kids. He can bring that child-like sense of fun and wonder while at the same time having the experience and breadth of knowledge to really know what he is talking about. If you have a kid who is still in the “dinosaurs are cool” stage, but is not ready for the detailed science, this is the book for you.

That’s it for today. Tune in Friday for The Second Day of Book Lists, when I will bring you..more dinosaurs!

By paleoaerie in Book reviews, Reviews, Uncategorized on December 4, 2019.
← National Online Learning Day The 12 Days of Books to Buy for Your Science Readers: On the Second Day of Book Lists… →