Another day at SVP, another boatload of information. Some may be wondering why I am devoting several posts to this meeting,when it may seem not as relevant to the general public. Fair question. people not actually doing science in an academic setting rarely get a chance to see anything about what it is like.  Science is often presented as a list of facts, but that is only part of the story. Science is a dynamic endeavor, never being satisfied with an answer, always working on the things we don’t know and revisiting the things we thought we knew to see if they still hold up under the new information. Science gets things wrong all the time, but this process of study and review and critical examination reduces the margins of error. Not all things that are wrong are equally wrong, rejecting evolution in its totality is a whole other category of wrong compared to disagreements about the rates of evolution in a particular lineage. No one in science who examines the evidence seriously disputes evolution or that dinosaurs existed, but exactly how evolution works, how dinosaurs lived, exactly who is related to whom; these are questions that people struggle with. With each new study, the path moves closer and closer to the truth, each time having the possibility of opening up whole new avenues of exploration we had never thought of before. That is what these meetings are all about, bringing minds together for new solutions to old questions and for finding new questions to ask about old solutions. What goes on at meetings is a glimpse behind the curtain of published papers and distilled textbooks, putting human faces onto that quest, faces that are, more often than not, students working together and with more experienced people. Most science is done not by white-haired old men in the lab, but by young, energetic students with a zest for learning. And there is so much more to do.

In the previous two days, there were collections of talks called symposiums, devoted to specific topics, such as on ontogeny and the la Brea tar pits, including a preparators symposium on fossil collection and preparation techniques. Friday included a special symposium on the tempo of evolution and dating the fossil record. Samuel Bowring presented the EARTH-TIME Initiative, an opportunity to date the stratigraphic record to a precision never before seen, allowing measurements as refined as +/- 20,000 years all the way back to Triassic times (>200,000,000 years ago). That is a resolution of 0.01%. The remaining talks were about research on specific areas and times contributing to that increased precision.

Terry Gates looked at cranial ornamentation in theropod dinosaurs, finding only larger theropods used bony ornamentation and that if a lineage developed it, the lineage quickly developed larger species. So the question now is why were bony cranial ornaments only selected for larger body sizes? Yuong-Nam Lee reported on new fossils of Deinocheirus, an enigmatic fossil previously known only from one set of huge arms, which allowed them to determine it was the largest ornithomimosaur ever found, sporting a large sail on its back near the hips, something like a small spinosaur sail. Picture a giraffe-sized ostrich, with a sail on its back, giant arms with huge claws, and a big,chunky tail. On second thought, maybe not so much like an ostrich, after all. 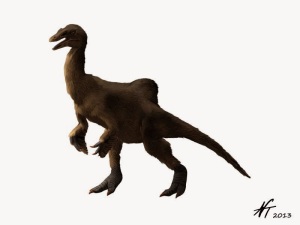 Other dinosaur reports include Ashley Morhardt, who reported that Troodon had the largest encephalization quotient of any non-avian dinosaur (i.e. it had a big brain). Most of its brain was made of the cerebrum, which not only makes a reasonable case for it being the smartest dinosaur, but supports a mosaic model of brain evolution, meaning that different parts of the brain evolved at different rates.  Amy Balanoff discussed the evolution of oviraptorosaur skulls and brains, showing larger cerebrums than most other dinosaurs, but reduced olfactory tracts, so they were similar to birds in having a relatively poor sense of smell. Walter Persons reported on fossils showing that Microraptor ate mostly fish, as well as small mammals and birds.

A session devoted to mammals had several interesting talks, such as one by one by Ross Secord, who concluded from his research that the body size increase seen in horses was related to warmer temperatures allowing an longer growing season causing increased availability of grasses, making up for the lesser nutritive value of grasses compared to other plants. I would argue however, that a shift to eating hard-to-digest grasses would result in increased body size not through increased availability, but to increase digestion efficiency. Horses are what is known as hind-gut fermentors, which is less efficient than the foregut fermentation seen in ruminants such as cows. This mode of digestion is more efficient at higher body sizes, allowing more time for digestion. Lindsey Yann found that horses were too much of generalist feeders to be useful for paleoclimate reconstructions, but different camel species were more specialized and could used to make determinations of relative aridity and plant cover. Rebecca Terry found that interactions between mouse species had at least as large an effect on population sizes as climate, with different species reacting differently to resource changes. Thus, there is no easy answer to predicting how species will react to climate changes because they cannot be looked at without understanding interactions throughout the entire ecosystem. Much of this sort of work uses MIOMAP and FAUNMAP, which are similar paleontology databases to the Paleobiology Database, but limited to mammals in North America and so may be more complete for these types of studies. 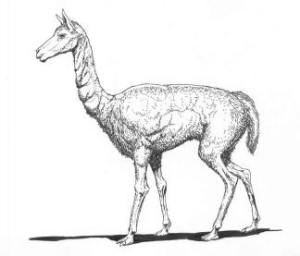 Brady Foreman discussed ways to interpret the completeness of the fossil record based on river deposition patterns and Patrica Holroyd discussed the “missing marsupial problem,” finding that because most eutherian mammal fossils are identified to species level and most marsupial fossils cannot identified beyond “marsupial,” there is a taxonomic identification bias in the literature and thus, species diversity studies.

Three other studies I would like to mention are about archosaurs, the “ruling reptiles,” including crocodilians, dinosaurs, and birds. Brandon Peecook looked at the bone microsturucture of Nyasaurus, which was either the earliest known dinosaur or the closest basal archosaur to it, and found that it had elevated growth rates compared to other reptiles, indicating that all dinosaurs may have had faster growth rates from the beginning. John Sarrazin reported that crocodilians and birds both use unidirectional air flow through lungs,as opposed to bidirectional like mammals, which uses a completely aerodynamically controlled system with no structural valves, so in all likelihood, the ancestral archosaur had these characteristics as well. Finally, Jennifer Nestler found that cold weather is not what limits the range of alligators. Rainfall contributed more than 60% to range limitations, most of the rest comes from warm weather during the summer providing long breeding seasons. Only 0.4% of the factors limiting their range could be attributed to cold weather limitations. Something to think about as global warming causes longer summers with elevated rainfall in the eastern United States.

At  the end of the day, after the talks and the poster sessions, this is the day for the annual auction, to raise funds for the organization that can be used to fund research and travel grants for students in the upcoming year. The auction consists of two parts, a silent auction and a live auction. In the silent auction, everyone has two hours on which to bid on the objects they want and the last bidder wins, much like alive version of eBay. The auction is filled with a wide array of donated items, everything from rare books and artwork to hand-knitted dino-themed baby socks, whatever people are willing to donate. After the silent auction comes the live auction, usually filled with more expensive, one-of-a-kind items, such as original artwork or the original copy of O.C. Marsh’s dinosaur monographs. I have even seen the services of a field cook and her personal field kitchen for a season get auctioned off. The auctioneers always have fun with it, usually dressing up in costumes. you never know who is going to be serving as auctioneer, it could be a zombie, King Tut, or Superman, but regardless, it is an entertaining spectacle.

An end to another day, only one more day to go, before everyone packs up to go home, or off to their next meeting, or a museum to do research, wherever their path leads them.