Home » Paleontology » Fossils of Arkansas » Fossil Friday, a fossil of not quite mammoth proportions

Fossil Friday, a fossil of not quite mammoth proportions

It’s time to reveal the answer to Monday’s Mystery Fossil. We had three people who correctly identified this as the skull of Mammut americanum, the American Mastodon.

Mastodon bones have been found throughout Arkansas, although almost all have been found either in northeast Arkansas between Crowley’s Ridge and the Mississippi River or along the Red River in Southwest Arkansas. According to the Arkansas State University Museum in Jonesboro, Arkansas has more mastodon finds than any other state in the mid-south region, with at least 20 different skeletons.  Most of the work on them has been done by Dr. Frank Schambach and others of the Arkansas Archaeological Survey, headquartered at the University of Arkansas at Fayetteville, along with members of the Arkansas State University Museum. This particular mastodon was excavated by Dr. Schambach with the help of the Arkansas Archaeological Society along the Red River in Southwest Arkansas, I think in 1987, although I am not sure of the date yet.

Mastodons were related to elephants, although not as closely related to modern elephants as mammoths. Mammoths have also been found in Arkansas, most notably the Hazen mammoth, found in 1965. That specimen was a Columbian mammoth (Mammuthus columbi), a less hairy version of the wooly mammoth (Mammuthus primigenius). They lived across much of North and Central America during the Miocene and Pliocene, although they are known mostly from the Pleistocene in Arkansas, the heyday of the Ice Age, which is when people traditionally think of them living. They were similar in size to modern elephants. 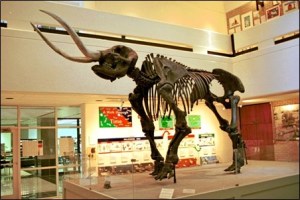 The teeth of mastodons, mammoths and modern elephants tell an interesting story. Modern elephants have a wide diet of vegetation from grass to fruit and tree limbs. The Asian elephant has teeth that are more plate-like in form, making a series of ridges that create an excellent grinding surface. African elephants spend more time in forests and bush lands, with a corresponding higher amount of bushy vegetation in their diet. Their teeth are large, multi-rooted teeth with a series of ridge-like cusps. Mammoths take the plate-like grinding surface to an extreme as an adaptation to the grasslands they frequented. Mastodons, on the other hand, specialized in the opposite direction, with large, prominent cusps suited to a more forested environment and diet. Thus, mastodons and mammoths formed a bracket surrounding elephant ecology.

Work that has recently come out has shed new light on why they went extinct. People have long argued over whether climate change or humans wiped out the megaherbivores at the end of the last ice age. The Overkill hypothesis postulated that early humans hunted them to extinction. There is also the alternative that other actions by early humans contributed to their extinction. However, while there has been plenty of evidence indicating humans did hunt mammoths (e.g. the Clovis people at the Dent site in Colorado), the hypothesis has come under fire for the lack of widespread hunting evidence and timing issues, with research indicating the megaherbivores were already going extinct before humans appeared on the scene. The other hypothesis, climate change, has gotten more support from a study of plant fossils. According to the new data, the early tundra environments were dominated, not by grass, but by forbs, weedy herbaceous plants with more nutrients than grasses. An earlier glaciation 20-25,000 years ago dramatically reduced the abundance of these plants. When the weather warmed up, the forbs increased again, but never approached their previous levels. When the next glaciation hit, the forbs mostly died out, allowing the less nutritious grasses to take over, which greatly reduced the amount of herbivores the land could support. Of course, this does not mean that humans had nothing to do with the extinctions, but it does mean they were likely not the primary cause, more likely simply throwing the last spear into the coffin of the great herbivores.

That’s it for this week. Check back Monday for a new mystery fossil. Have a good weekend.

By paleoaerie in Fossils of Arkansas, Paleontology on February 7, 2014.
← You found a fossil… now what? (all the details!) Mystery Monday, snow edition →