Home » Paleontology » Fossils of Arkansas » “Arkansaurus,” the only Arkansas Dinosaur

“Arkansaurus,” the only Arkansas Dinosaur

Welcome to the first of a series on Arkansas fossils. Arkansas is not generally known as a mecca for dinosaur lovers. Most of the dinosaurs in Arkansas are statues created by a man named Leo Cate, which have all the accuracy of the old plastic toys on which he based the statues, which is to say, not much (of course, he made them for enjoyment, not as anatomical models, so they serve their purpose). Nevertheless, dinosaurs are the first thing I get asked about when I give talks in schools, so I decided to start off with a discussion of our one and only dinosaur, called “Arkansaurus fridayi.”

Ordinarily, I would not delve into how a fossil was found here, but because Arkansaurus is unique and illustrative of how many fossils are brought to the attention of science, a brief synopsis of the story of how it was brought to the attention of science may be of interest. In August, 1972, Joe Friday was searching for a lost cow on his property near Lockesburg in Sevier County, when he found some bones eroding out of a shallow gravel pit. He showed them to a Mr. Zachry, whose son, Doy,  happened to be a student at the University of Arkansas in Fayetteville.  Doy showed the bones to Dr. James H. Quinn, a professor at UA, who identified them as part of the foot of a theropod dinosaur. He contacted the Arkansas Geological Survey and Dr. Quinn, Ben Clardy of the AGS, and Mr. Zachry went back to the site where they found the rest of the bones. Dr. Quinn presented the bones at a meeting of the Society of Vertebrate Paleontology where he discussed the bones with Dr. Edwin Colbert, a noted paleontologist who was an expert in dinosaurs and vertebrate evolution.  They came to the conclusion that the bones probably came from some type of ornithomimid, a group of ostrich-like dinosaurs (the name literally means bird-mimic), one of which, named Gallimimus, was made famous in Jurassic Park. Despite further excavations, no additional bones have been found. Dr. Quinn never officially described the bones, publishing only an abstract for a regional meeting of the Geological Society of America in 1973. It remained for Rebecca Hunt-Foster, now a paleontologist for the Bureau of Land Management, to publish the official description 30 years later in the Proceedings Journal of the 2003 Arkansas Undergraduate Research Conference. 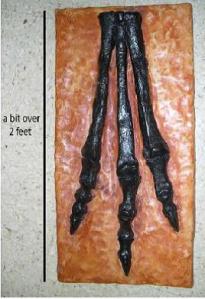 The first thing to know about this particular dinosaur is that “Arkansaurus fridayi” is not its real name. In fact, it doesn’t even have an official name. The reason for this is because all we have of it is part of one foot. Specifically, we have the metatarsals, a few phalangeal bones, and the unguals. In non-science speak, on humans, they would refer to the bones making up the front half of your foot. The metatarsals are the long bones the toes are attached to forming the front part of the arch, the phalanges are the toes, and the unguals are the bony cores of the claws. The pictures show the actual bones and a cast, in which the missing phalangeal bones have been restored. The real fossil has all the phalangeal bones connecting to the metatarsals and all the unguals, but a couple of the middle phalanges are missing. We have no ankle bones and nothing at all of the rest of the animal. With such little to go on, it has been difficult to determine exactly what kind of dinosaur it is, so no scientist has been comfortable giving it an official name yet. To add to the complications, not a whole lot of feet from theropod dinosaurs are known, so good comparison material is limited, and little is known about theropods in the southern United States to begin with. (Aside: dinosaurs are separated into two groups. The Ornithischia, which are comprised of the herbivorous, mostly four-footed dinosaurs; and the Saurischia, which include the giant, long-necked sauropods and the bipedal, mostly carnivorous theropods.)

So why only one foot? What happened to the rest of it? I’ll let Rebecca Hunt-Foster explain it, as she did an excellent job:  “There are several possibilities that would explain the occurrence of a single foot at the Friday site. It is a possibility that the rest of the Friday specimen could be gravel on highway 24. Road crews could have cut into the Trinity Group (Ed. Note. The rock formation in which the bones were found) when excavating the Quaternary gravel that lies directly above it, when building the road in 1954. As another theory, the animal may have begun to decompose before its body was carried by water to the site of deposition. Consequentlly, bits and pieces could have been scavenged by predators in the Lower Cretaceous, resulting in only a single foot remaining for preservation. Finally, it is possible that the entire specimen was preserved but that most of the skeleton was lost to Pleistocene erosion.”  So just think about that the next time you go driving down the road. What fossils might you be driving upon?

Even if we don’t know for sure what it is, we do have some clues and can narrow down, at least a little, what it might be. What we know for sure is that it is some kind of coelurosaur. That, unfortunately, doesn’t help us a lot because coelurosaurs cover everything from little compsognathids to giant tyrannosaurs to modern birds, known principally for having bigger brains than earlier theropods, slender feet with three toes, and many of them had feathers. It does tell us it is not closely related to dinosaurs like allosaurs and spinosaurs, nor to early theropods like ceratosaurs and Coelophysis. Dr. James Kirkland opined that it was similar to Nedcolbertia, a small coelurosaur found in Utah. The problem here is that no one knows much more about Nedcolbertia either and its relationships to other dinosaurs are unclear. Quinn and Colbert thought it may have been an ornithomimid, but closer inspection by Rebecca Hunt-Foster and comparison with known ornithomimids indicates this is unlikely. Right now, all that can really be said is that it is likely a small coelurosaur, but not a tyrannosaurid, ornithomimid, or advanced form more closely related to birds, which leaves a small group of poorly known coelurosaurs no one really knows what to do with.

Using these animals as a comparison, what can we say about what kind of animal “Arkansaurus” was? It was likely a fast runner with probably an omnivorous diet, eating smaller animals and supplementing its diet with plants. It would likely have stood somewhere between 2-4 meters (6.5-13 feet) tall. It would have looked something like an ostrich with long arms ending in hands with three functional fingers, with one of them being at least semi-opposable, and a jaw filled with small teeth. If it had feathers (which seems increasingly likely), the feathers would have looked more like fur than the large feathery plumage seen on ostriches today. It would also have had large eyes like ostriches, with excellent color vision, based on the fact that its nearest living relatives, crocodilians and birds, all see a broad spectrum of colors (even better than humans).

The rocks the bones were found in were part of what is called the Trinity Group. These rock layers (or strata) consist of layers of sand, clay, gravel, limestone, and gypsum laid down in the Early Cretaceous Period, roughly around 100-120 million years ago (what is known as the Albian and Aptian Ages). The rocks indicate that during the time the rocks were formed, the environment was a shallow marine coastal area not unlike south Texas near the Rio Grande or in the Persian Gulf. Our dinosaur would certainly not have been alone. There were other dinosaurs in the vicinity, we just know very little about them. Sauropods left thousands of tracks in the coastal sediment forming a massive trackway found in a Howard Country gypsum mine in 1983. Another trackway found in 2011 has tracks from sauropods such as Pleurocoelus and Paluxysaurus (which may or may not refer to the same species and may or may not also be called Sauroposeidon) as well as tracks from what was probably the giant theropod Acrocanthosaurus.

Most of the information and images in this post not directly linked to came from the following sources. Many thanks to Rebecca Hunt-Foster for clean pictures from her paper, which she also graciously supplied.

UPDATE: Arkansaurus has recently been named the Arkansas official state dinosaur, reviving interest in the fossil. It is currently being re-examined by Dr. Rebecca Hunt-Foster, with the hopes that new fossils and information that has come to light since her last publication will provide a more refined determination of its relationships.

By paleoaerie in Fossils of Arkansas, Paleontology on September 2, 2013.
← The Cambrian of Arkansas Dinosaur Odyssey: a Journey You Should Take. →