Many people have an issue with scientists, particularly those studying evolution and paleontology, for making statements they feel are pure speculation. I absolutely agree that people should be upfront about what is known and what is speculation. Most scientists ARE generally clear about that. If you ask most scientists, they will tell you what we know and don’t know. That is actually one of the biggest problems that scientists have with almost all of the shows and most of the books written for the public. Those outlets are not clear about what we really know and what we don’t, what is speculation. Most scientists I know work really hard at trying to clarify that sort of thing and get very frustrated when their words are twisted around. Many scientists have refused to work with film crews for precisely that reason. So please don’t blame the scientists. Write to the shows and demand they are clear about their speculations. 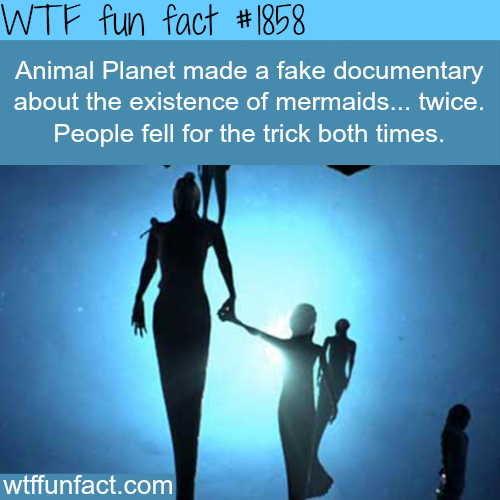 Sadly, I wish I could say all scientists act this way, but it is true, not all do. Scientists are only human after all. There are problems with some scientists. Believe me when I tell you that we recognize this and try to stop it. The lab I worked in to get my doctorate had a reputation for being spoilers, as it were, because a large portion of our research involved figuring out the limits of what the data really let us say and then telling others no, you can’t say that because the data do not extend that far. Our work was very much about separating speculation from reasonable interpretation and fact. But we were hardly alone in that regard, it is something most scientists work hard to do. Paleontology is admittedly one of those fields in which it is easy to take the fossils we have and in our excitement try to say too much about them. So we do our best to restrain ourselves and other workers from extrapolating too far. Go to a paleontology conference and you will see that on display in abundance. 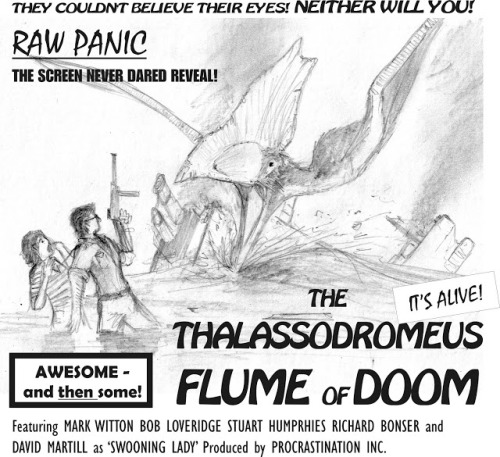 Unfortunately, that rarely shows up in material done for the public. The film crews and honestly, most of the public, do not want to hear we don’t know. They want to hear the fanciful stories.  Most people get annoyed with scientists when they equivocate and don’t give straight answers. We frequently hear from people, well which is it? Is it this way or that way? If you can’t say with absolute certainty one way or the other, you must not know ANYTHING, when in point of fact, there is a vast difference between not being sure and not knowing anything, I am sure most will agree. But most people don’t want to hear we don’t know with certainty, we can only say this much about it. I have even seen that in my college courses. Many students are uncomfortable with the material I cover in which there are no good answers everyone agrees on. They want definitive answers. A large part of that, I think, is that science is taught in schools very poorly, as a list of facts to memorize, not as a way of thinking and an expanding body of knowledge that is constantly re-examined, with large areas we don’t know yet. In fact, and what makes science fun and interesting for people doing it, is that science is more about what we don’t know than what we do. But happily, I can say that is changing in many areas, with the introduction of more hands-on, exploratory teaching methods. 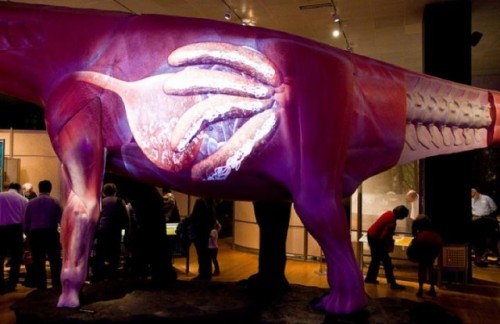 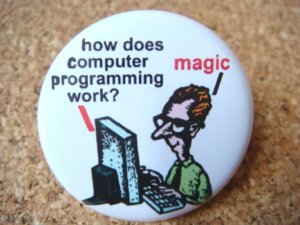 Get your button here. http://www.etsy.com/listing/50800011/how-does-computer-programming-work-magic

One of the challenges though, is that many things the lay person thinks are pure speculation are not speculation at all, but are backed up by lots of evidence that there is simply not enough time to go into. Many computer programmers simply tell their clients what they do is magic because to answer their questions adequately would take months of training to even get them to the point they could understand the answer. Would you tell a computer programmer what they are doing is pure speculation simply because you don’t understand it? We aren’t trying to be elitest, there is just a lot of information we don’t have time to transmit. There is simply too much going on, too much data, too much research for anyone to keep track of it at all. Even professionals who try to keep up as part of their full-time job can’t do it. So it would be foolish to think anyone who doesn’t spend most of their time studying the research could possibly have a good grasp of the intricacies and quantity of data. It therefore becomes quite the annoyance when people say you can’t know something when they have no idea how much we do know. Many of those things people say we can’t know have been studied for decades by many people who have spent their lives figuring out how to go from speculation to concrete data and hard fact. Most people don’t realize the extreme levels of simplification it takes to get some concepts across because no one can provide all the data backing up those assertions without having their audience earn a graduate degree in the process.

Is all this me telling you to just trust whatever we say? Absolutely not.  But don’t expect to come in on the ground floor and know what is going on at the top any more than you could expect to speak perfect French by catching someone speak a few words on TV. Understand that you are only getting the tip of the iceberg. What you see on TV is a seriously flawed transmission of a few grains of knowledge from a mountain range of data. Learn as much as you can from reliable sources. The more you know, the richer your interactions with professionals and the more in depth we can talk to you. We will be happy to share with you everything we know, that’s our job. But what we tell you is highly dependent on the level at which you come to us and the amount of time people are willing to spend. Also understand the quantity of data is more than any one person can understand, even those whose job it is to do so. That is why we have many people studying problems. No one can have all the answers. That is why we keep asking questions. Being open about what we know and what we don’t allows us the freedom to learn more and shows us the path about where to go next. Scientists don’t leave things at speculation, they try to figure out how can we go from speculation to understanding. But if you want to understand all the steps involved, may I suggest grad school?

By paleoaerie in Uncategorized on February 23, 2014.
← Dino Sites to Avoid Mystery Monday! Can you identify the fossils in the face? →